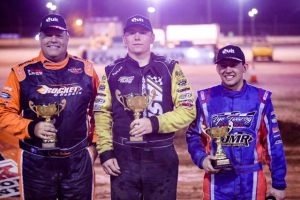 Tyler Erb has tonight claimed the third round of the Di Candilo Steel City USA Invasion Tour at the Make Smoking History Collie Speedway in emphatic fashion, defeating Craig Vosbergen and fellow countryman Devin Moran in what was the third brilliant feature race in as many meetings and his second feature victory of the series so far.

Erb was all class throughout the night, setting quick time, winning a heat and coming second in the other to set up a pole position start for the thirty lap feature alongside West Aussie local Craig Vosbergen, while the second row would be made up of Devin Moran and Round One winner Jason Fitzgerald.

The first start of the feature saw Victorian visitor Cameron Pearson backwards against the turn three wall, bringing the field back for a complete restart.
The second attempt saw Vosbergen get the jump before Erb simply planted the right foot, moved around his outside and led the opening lap by 0.033 seconds.
Just as the whole field crossed the line to complete the lap the yellows came on with Lee Watt and Michael Holmes limping across the line and eventually coming to a stop to bring out the yellows.

Erb would lead away the single file restart from Vosbergen while Devin Moran would begin working over Fitzgerald for third.

Moran looked on the outside but the move didn’t work, seeing him lose some ground and allow New South Welshman Ryan Fenech through for fourth.

With five laps complete the red lights would come out as Jay Cardy found himself spinning in turn three, with Ben Nicastri also getting involved and ending with Cardy precariously balanced on his side in an incident that eliminated both drivers.

On the restart Erb set the quickest lap of the race immediately, and would lead the field into lapped traffic after completing just eleven circulations.

As he entered traffic he had a 3.2 second lead on second placed Vosbergen: a lead that dropped a lap later to 2.6 seconds and then to 1.2 seconds as Vosbergen gained significant ground while Erb struggled to get past two battling lapped cars. Eventually Erb would get by and put a few cars between himself and Vosbergen, with Fitzgerald closing on Vosbergen and Moran then moving under Fenech for fourth on lap sixteen.

All of a sudden Erb had a big lead while Vosbergen, Fitzgerald, Moran, Fenech, Kye Blight and Paul Stubber were battling it out in very close quarters in a fight that went lap after lap. Eventually though it all had to come undone as the six cars were also fighting through lapped traffic, with Fitzgerald, who had been passed by Moran, and then Stubber spinning together while running fourth and seventh respectively.

Both drivers restarted in their positions but the race was over for Fenech as he headed infield.

Erb would lead away Vosbergen and Moran for the final stanza and from here the positions never changed, Erb claiming his second feature win in Australia and extending his overall points lead to twenty points heading into the final round at Albany.

Earlier in the night heat wins were shared by Erb, Fenech, Vosbergen, Joe Godsey, Moran and Fitzgerald while local racer Paul Joss won the B Main. Australia also won the USA vs WA Shootout, with two victories from three, with some local fans thrilled recipients of the Dirt on Dirt subscriptions as given out by the winning drivers.

The Di Candilo Steel City Invasion Tour will come to a thrilling a tomorrow night at Albany Speedway, so make sure you get your backside trackside for your last chance to see our five American and four interstate visitors on track!