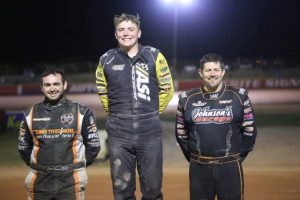 American Tyler Erb didn’t lead many laps tonight at Albany Speedway for the final round of the Di Candilo Steel City Invasion Tour, but the two that he did lead were the most important as he claimed the feature victory, his third out of four meetings, to go on and also claim the overall Invasion Tour points.

In what was one of the most exciting Late Model features ever seen in Western Australia, the lead changed no less than four times between three different drivers, putting on a show for the faithful and appreciative Albany crowd.

Erb started on the second row for the thirty lap feature alongside Katanning’s Kye Blight after West Aussie local Paul Stubber and American visitor and round one victor Jason Fitzgerald each scored two heat wins to set up a front row start.

As the race went green Fitzgerald was the man who got the first jump and pulled away quickly, while Blight quickly began to apply pressure to second placed Stubber only to go high and lose ground. This allowed Erb to start making his move on the inside, but Blight didn’t give up, persisting with the high line.

By lap four Fitzgerald had worked his way into lapped traffic, passing one car quickly only to face a pack of six cars all battling it out ahead of him. Behind him, Stubber used the traffic to his advantage to close the gap, while Moran made a move on Blight for fourth.

Blight fought back and went for a big move on Moran which didn’t work, while up ahead the top three were beginning to battle it out in very close quarters, Stubber closing the gap to less than a second on lap eleven, then 0.7 seconds the next time around with Erb right on his tail.

On lap thirteen a gap opened up for Stubber with Fitzgerald stuck in traffic and he took it, diving underneath to take the lead, with Erb moving outside Fitzgerald to grab second. Shortly after though the yellows came on for Blight, who’s strong Invasion tour came to an end with a spin and a flat tyre on lap fourteen.

Stubber lead away Fitzgerald, Erb and Moran on the restart, but it would only last a couple of laps when Erb had a half lose and left Moran nowhere to go, making heavy contact and ending Moran’s night while Erb was relegated to the rear. Luckily for Erb though he was only relegated to the rear of those on the lead lap and considering all but the top six cars had already gone down a lap, it was only a couple of positions penalty.

Stubber led away again with Fitzgerald right behind him, eventually making a move on lap nineteen, diving through underneath on lap nineteen to retake the lead. Lapped traffic would again allow Stubber to close on Fitzgerald once again, with New South Welshman Ryan Fenech having the best run of his tour to also be challenging the leaders in third while fending off a hard charging Erb.

All of a sudden the makeup of the race would change once again as Stubber had a moment and dropped a few spots, allowing the top three of Fitzgerald, Fenech and Erb to close, Erb then making his move into second on lap twenty seven.

In the chaos of cars going everywhere, Erb was able to surprise Fitzgerald and dive through to grab the lead coming out of turn two, a position he held for the remaining two laps to lead home Fitzgerald and Fenech to claim the win.

Courtesy of his feature win Erb also claimed the overall points for the Di Candilo Steel City Invasion Tour, defeating Fitzgerald by twenty one points, while Paul Stubber was nine points further back in third place.

A huge thankyou to all of our visiting American drivers in Tyler Erb (and the Pearson Motorsport Team), Jason Fitzgerald (and the Halliday Racing Team), Devin Moran (and the Oldfield Racing Team) and Joe Godsey and Jeff Roth (and the entire Roth Motorsports Team) for their support with this series, as well as our interstate visitors in Ben Nicastri, Ryan Fenech, David Doherty and Cameron Pearson.

Thanks also to all of the local competitors who supported this series, making it bigger and better (with forty drivers contesting at least one round!), as well as all the officials, sponsors, crews, fans and families who helped make the whole tour possible. Also a big thankyou to the Perth Motorplex, Make Smoking History Collie Speedway and Albany Speedway for hosting the series.

Let’s hope to do it all again next year!