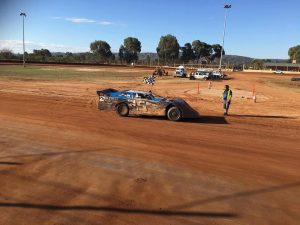 Comley started from pole and immediately hit the lead as the feature race went green as David Nylander shot into second place.

Clint Marriott attempted to show the nose to Nylander, but he was having none of it, racing away and attempting to chase down Comley, who had already opened up over a second’s gap by the second lap.

Nathan Callaghan was all over the back of Marriott as he looked for a way through for third place, while Rob Wells went for an excursion on the infield that put him a lap down and Lance Ferguson retired.

Callaghan then finally made the move on Marriott, grabbing third with just two laps remaining, but up front it was all Comley, crossing the line ahead of Nylander.