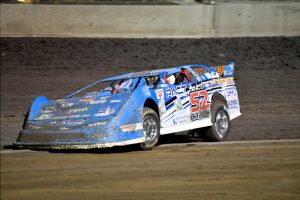 After what has been a massive season that started way back in October last year, the official summer series for the Late Models will this weekend come to a close.

This weekend is a double header, as not only will the Perth Motorplex Track Championship come to a close, but also the RACIN’ Tyres and Accessories Pro Dirt Series.

For the Pro Dirt Series Oldfield again leads Cardy, this time by eighty eight points, all but sealing the series win with victory in last weekend’s round at the Perth Motorplex. Cardy had a good run last weekend to leapfrog Jamie Oldfield and Kye Blight into second after Jamie had mechanical woes that saw him fail to start the feature, while Blight blew an engine and although having nominated for the event, is not able to compete without a motor.

Both Warren and Jamie would love to get another feature win, with Warren the last start victor at the Motorplex and hoping to make it two from two.

Challenges will once again come from Jay Cardy, who despite several podium finishes this season hasn’t quite been able to break through for a feature win, Marc Giancola who recently claimed the Bunbury Speedway Track Championship, Michael Holmes who has been fast all year and even claimed a couple of feature wins and Brad Blake who raced to victory a fortnight ago at Bunbury. All four have been consistently right on the pace throughout the season and would love to end it all on a high note.

Australian champion Kodee Brown once again returns to ruffle the feathers of the other stars and after some epic performances throughout the year will be another hoping to finish his season on the top step of the podium.

Add in former Australian Champions Brad Ludlow and Ryan Halliday who had solid runs in the last Perth Motorplex event, and a whole host of other competitors and we have allthe ingredients for what will be an epic grand finale, a fitting way to end the season.

Be at the Perth Motorplex this Saturday night for the last chance this season to see all the stars and their cars before the Winter Series commences!

Picture: Can Cardy break through for a win? Picture courtesy Peter Roebuck.