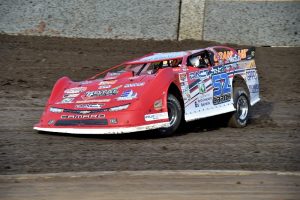 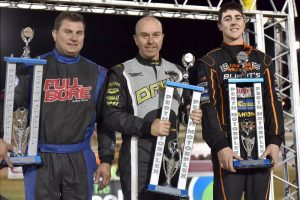 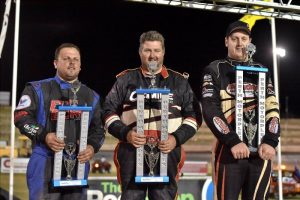 Although Darren Kane and Michael Holmes won the preliminary features tonight at the Perth Motorplex in night one of the Di Candilo Steel City Australian Late Model Championships, it is Jay Cardy who is currently leading the point standings after night one.

Cardy had a perfect night prior to the features, recording two heat wins to be undefeated and alone on top points. Kodee Brown and Ryan Halliday are next best with 85 points apiece, while defending Australian champion Darren Kane is fourth on 84 points. Former Australian Champions Marc Giancola and Brad Blake are next with youngsters Kye Blight, Jarrin Bielby and Paul Joss, while Craig Vosbergen rounds out the top ten.

The first preliminary feature saw a depleted field of thirteen starters from a possible twenty two, with many choosing not to start as there were no points on the preliminaries.

Jay Cardy lead from the front ahead of Ryan Halliday in the first stanza, which came to an end after only two laps when the yellows came on for a spun car.

Cardy led away at the restart with Halliday in second but it was a matter of laps before Michael Holmes moved into second while Warren Oldfield made his presence felt as he moved into third.

At the end of lap eleven Holmes was able to grab the lead from Cardy, but one lap later Cardy was back in the lead, the top four fighting a close battle.

All of a sudden Paul Stubber made his presence felt, making it a five way battle. Holmes began to race away while Warren Oldfield moved into second, Cardy relegated into third spot as the race continued with just five laps to go.

Halliday pulled infield with four to go, while lapped traffic bunched the rest of the leading pack up, allowing Jay Cardy to get past Oldfield right on the line, Holmes officially defeating Cardy and Warren Oldfield.

The second prelim saw Kodee Brown opening up a massive lead very quickly, over five seconds ahead in the first four laps. Craig Vosbergen sat in second while Kye Blight was in third. Even in lapped traffic Brown was still able to maintain a solid lead, his lead well over 4.7 seconds until disaster struck.

Brown had lapped up to eighth place and was catching the next pack of cars when he went a little wide and crunched the turn four wall, ending his race and bringing out the yellow lights. This set off a chain reaction with second placed Craig Vosbergen also heading infield, while fifth place Jarrin Bielby also pulled infield.

This meant that Kye Blight would lead away Darren Kane and Jamie Oldfield for the remaining seven lap restart. Blight, Kane and Oldfield didn’t seem to care it was only a preliminary feature, with the leading trio fighting tooth and nail to get to the front spot. Kane went outside Blight to grab the lead with three to go, but Blight fought back, the duo side by side with Oldfield right on their tail. 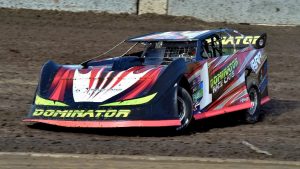 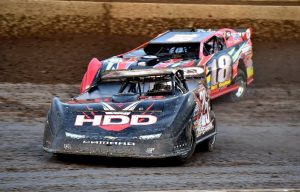 With two to go they were just 0.047 seconds apart, stuck together for the entire lap and separated by just 0.132 with one lap to go. Kane made one last lunge at the lead on the final corner, with Kane and Blight making contact, Blight spinning across the line. Kane grabbed the win while Oldfield was able to grab second while Blight went backwards across the line for third in another spectacular finish.

Earlier in the evening, Ben Nicastri kicked off his Australian Title campaign in the best possible way, setting QuickTime in what was a brand new track record for one lap in qualifying. The old record was a 16.47 second lap, set some fifteen years ago almost to the day by Ben Ludlow, with eight drivers going under the old record; Nicastri stopping the clock with a 15.978, the only driver to do a sub sixteen second lap.

Heat one saw Jay Cardy lead early, with defending champion Darren Kane closing on him in the latter stages. Unfortunately for Kane he didn’t have enough to pass Cardy for the win.

The second heat saw Ryan Halliday leading, but the real battle was between Kye Blight and Craig Vosbergen as they fought for second place. The duo fought hard, moving very close to the fence on a number of occasions. In the closing laps the leading trio closed in on each other and with one to go there was just 0.4 seconds between them all. Blight made his move in turn three but it didn’t quite come off, resulting in Halliday defeating Vosbergen, while Blight settled for third.

Heat three saw a controversial start with Jamie Oldfield and Paul Stubber making contact, seeing the first yellow light of the night. The second start was much better, with Oldfield leading Stubber in the opening turns. On lap two though it all came undone as Jamie began to slow, handing Stubber the lead, while Jarrin Bielby was the surprise in second place. As the laps wound down Brad Blake began to close on Bielby, but he was able to hold strong, Stubber defeating Bielby and Blake.

The final heat of the opening round saw Kodee Brown leading from the front, with Warren Oldfield quickly into second. Lap three saw Warren Oldfield grab the lead, but again it fell apart for the Oldfield family for the second time in as many races, as he suddenly slowed, handing Brown back the lead. Brother Jason Oldfield was baulked as Warren slowed, but he was able to make his way past without losing a position and chase after Brown. However, it didn’t make a difference as Brown defeated Jason Oldfield, with Morgan Melvin coming home third.

Heat five was the opener of the second round, with Jay Cardy coming straight from position five to be leading after just one lap. Darren Kane, came from third to settle into second, while visiting Victorian Cameron Pearson settled into third. The yellows came on after two laps with Jai Mazzini spinning in turn two, closing the gap between Cardy and Kane for the restart. It didn’t faze Cardy though as he again raced away with the lead. Kane however wasn’t giving up easy and began to close the gap until the yellows came on once again for Mazzini. Again Cardy pulled away, with Kane crossing the line behind him as the chequers fell while Michael Holmes was third.

The sixth heat saw Bryn Haythornthwaite go high in the opening lap and end up being spat out the back after starting on the front row, while Paul Joss was the man who took the lead. Ryan Halliday, Kye Blight and Craig Vosbergen were having a ding dong battle in the middle of the field, then closed on David Nylander in second and began to swamp him. The trio continued to exchange positions corner after corner, lap after lap, but in the end Joss’ lead was too much as he defeated Blight, Halliday and Vosbergen in a great race. 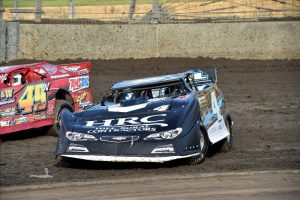 The penultimate heat of the night took a long time to get underway, with the field pulled back twice before another yellow after Stuey Hill spun in front of the pack, leaving Veronica McCann and Mick Clune nowhere to go. The restart saw Chris Pavlovich lead away while Brad Blake and Jarrin Bielby again picked up their battle for second. Quickly Jamie Oldfield arrived at the party and moved into second as Blake took the lead, while Bielby also passed Pavlovich for third and from here the order remained unchanged until Oldfield stormed around Blake to grab the win on the final lap.

The final heat of the night saw the first start called back after one car failed to go. The second start saw Morgan Melvin get a huge run on the outside before touching the rear of another car and spinning infield, somehow the rest of the field missing him. Marc Giancola quickly made his way into the lead and raced away until a restart for a spun car bunched the field up again. The restart saw the top three cars of Giancola, Oldfield and Brown battling in close proximity, but it was Giancola who held on for the win over Oldfield and Brown.

With the opening night of proceedings now complete, all that is left is one more round of heats before the feature events tomorrow night. Stay tuned tomorrow as the final grids are released and all the information is released as it happens.

Who will become A1? Be at the Perth Motorplex tomorrow night to find out!

Points After Night One