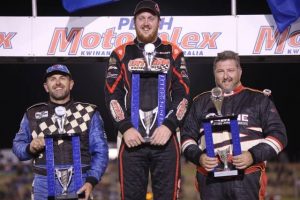 For the first time since the 20th of October 2012, Jay Cardy has claimed a feature win at the Perth Motorplex and what a way to do it, claiming the $4,000 winners cheque for the Di Candilo Steel City Topless event in a show that quite simply had everything!

Cardy had a solid night and would start from pole position alongside Paul Stubber for the all-important forty lap final, and it was Stubber who would get the first advantage and race away into the lead. Warren Oldfield, coming from position four, would quickly move into second while Cardy would drop to third.

Former Australian Champion and multi time feature winner for this season, Ryan Halliday, would then begin to apply the blowtorch to Cardy as he looked for a way through, but couldn’t make the move stick while up ahead Stubber would lead Oldfield by over 1.2 seconds on lap four and then extend that to over a 1.7 second lead by the completion of lap five.

A few laps later and it looked like Stubber would continue to break away when it all came undone. A couple of cars came together ahead of him as he was attempting to lap them: Veronica McCann and Nathan Callaghan colliding, Stubber piling in and then Daniel Ameduri left with nowhere to go, hitting and getting significant air in his #83 machine, coming to a rest at a precarious angle on top of Stubber.

Callaghan and Stubber would be unable to restart while Ameduri and McCann would retake their positions in the field: albeit only momentarily for McCann as she pulled infield a few laps later while the incident appeared to fire Ameduri up as he began to work his way through the field.

Warren Oldfield would lead Cardy and Halliday on the restart with thirty one laps remaining, and for the next few circulations it was business as usual, cars finding their way around the track with minimal issues. On lap sixteen though as the lead group were working through lapped traffic, a lapped car would hold Cardy up ever so slightly, Halliday taking the opportunity to duck by on the inside in a centimetre perfect move.

Halliday would set out after Oldfield as behind them Kye Blight, who had worked his way into the top five, had an uncharacteristic spin down the back straight on lap twenty in front of a charging pack, making contact with Mick Comley as he raced past and then heading infield, while Halliday would suddenly slow shortly after, also ending his race prematurely.

All of a sudden Oldfield was leading Cardy, while Michael Holmes was in an intense battle with Ameduri for third, Ameduri eventually going right around the outside of Holmes to grab the third place position.

Oldfield would shortly after catch both drivers and put them a lap down, leaving just himself and second placed Jay Cardy on the lead lap: six cars remaining on track with ten laps to go. 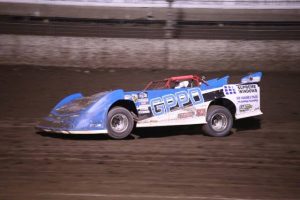 Once again the fickle hand of fate struck and this time it was to the detriment of leader Oldfield, suddenly going up in a puff of smoke and catching fire, showering the track with sparks and ultimately heading infield with four to go, handing Cardy the lead.

From here it was a sprint to the finish for the remaining four laps: Cardy going on to be the only driver to complete the full forty lap distance, with Ameduri coming home in second with thirty nine laps, his best ever result in Late Models, and Michael Holmes completing thirty eight laps in third. Joe Chalmers held on for the best result of his short career to come home fourth while Mick Comley was the final driver to greet the chequered flag: an impressive effort by three rookies to finish in the top five.

Cardy’s night was almost faultless, starting on pole position for the feature, recording an unofficial forty lap record (unofficial because the race had stoppages, but still completed in a shorter time than any other attempts at forty laps!) and also resetting a six year old record in the final heat race, setting a new mark of 2.09.910 for eight laps, bettering Jamie Oldfield’s previous best set in 2012 by just under one second.

Courtesy of tonight’s results, including Brad Blake’s misfortune after crashing out of the first heat and then failing to start another race throughout the evening, Cardy now leads the overall XLI Pro Dirt Series points, holding a twenty two point buffer over second placed Warren Oldfield while Michael Holmes sits in third ahead of Blake.

The Late Models now have a short break to prepare for the next round of the XLI pro Dirt Series, again at the Perth Motorplex, this time on the 25th of February, 2018 as support to the World Series Sprintcars in what is sure to be another huge show.