With COVID-19 still having an impact on almost everything around the world, the LMRWA have tonight released an updated calendar for the upcoming 2020/21 season.

The season is still scheduled to start in October with the annual Ray Tulk Memorial to be held at Ellenbrook Speedway, then followed a week later by the series making its debut at the Kellerberrin Speedway.

The first change to the calendar is the removal of the 24th of October show: the Motorplex opener now scheduled for a week later.

There will be no change to the next four shows at the Motorplex, while the New Year will begin with the opening night of the Late Model Nationals at Ellenbrook Speedway on the 3rd of January.

The Motorplex will host the next two nights of the Nationals, on the following Wednesday and Saturday nights as was the case for last year’s Championship event.

The two night show to be held on the 5th and 6th of February, 2021 is still in the schedule at this stage, with a second two night show a fortnight later now added in. If all four of these nights continue, the first two shows (the Friday’s) will be limited schedule shows.

From here the final three rounds of the season will still be held at the Perth Motorplex: the Silver Cup on the 13th of March, the awesome Gold Cup, again including the retro night aspect on the 27th of March and the Grand Final show, which is an addition to the original calendar, which will bring the season to a close on the 17th of April, 2021.

This now gives us a seventeen round Pro Dirt Series for season 2020/21!

As stated when the original calendar was released, this schedule can be changed at any time, so keep an eye on the LMRWA page for all the latest details. 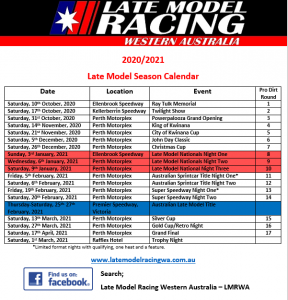