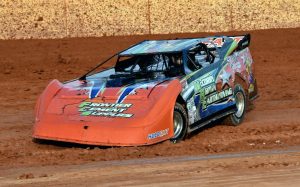 After a number of weeks break, the thunder and lightning Late Models will this weekend roar back into action and make the ground pound in front of a huge crowd at the Krikke Boys Shootout.

The Late Models have been invited to be part of the action this Sunday night at Bunbury and are thrilled not only to be part of the event that pays tribute to Darryl and Jason Krikke, but also to be back on track for what will be a round of both the Cleanaway Bunbury Track Championships and the Speed Torque All Stars Series.

A good field of seventeen cars have nominated for the event, headed by Australian Champion Kodee Brown. He has been in hot form recently, no matter what track and what division he has shown up to, and this weekend will see him once again ready to take on a full field.

Of course, names like local hero Brad Blake and former champion Marc Giancola will certainly be fighting hard to ensure that Brown doesn’t end the night on the top step of the podium. Both Blake and Giancola haven’t had the finishes they want recently and will be hoping to turn that around this weekend.

Hot shot Brent Vosbergen is back for another crack at a feature win, while another youngster in Morgan Melvin, along will his fellow Collie domiciled driver Paul Joss will all be aiming for a strong finish this weekend.

Add in other strong hopes like Ken MacPherson and Kye Blight and once again the Late Model concoction has all the ingredients for what is sure to be a show stealer!

Make sure you are down at Bunbury this weekend for the Krikke Boys Shootout, featuring the thunder and lightning Late Models!