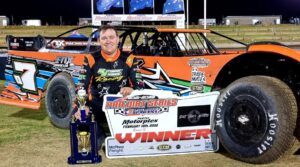 After a lengthy absence from the top step of the podium, Kodee Brown (McCorry Brown Racing Team) has tonight raced back into form and claimed the Late Model feature win in Round Twelve of the Pro Dirt Series, proudly presented by the Dirt Track Nutters.
In what was just his second ever Pro Dirt Series feature race win, and first Pro Dirt win at the Perth Motorplex (though his fifteenth career feature win at the Motorplex and second in Late Models, his other being his Australian Title victory), Brown had to fight hard to maintain the lead, which he did over a number of restarts.
Freddy Kinsella (Team Green Racing) and Brown would win heat races in the opening round, with Brent Vosbergen (Team Vosbergen Racing – TVR) and Paul Stubber (Bar31) winning heats three and four respectively, with Brown’s second place in his second heat enough to secure pole position in the feature alongside Brent Vosbergen.
Eighteen of the original starters on the night were able to take the green in the feature, with Cody Avins (Avins Racing) and Brad Blake sidelined after a big incident in the opening heat while Jamie Moon, who was running a paint scheme in tribute to his late father John who passed away recently, was also unable to make the call.
As the thirty lap feature race went green, Brown would lead through the opening turns with Vosbergen into second and the impressive Kinsella settling into third.
Further back David Nylander (Nylander Motorsport) was running the highline and battling with Paul Stubber, the duo just behind fourth placed Warren Oldfield (Oldfield Racing) who began pressuring Kinsella for third on the second circulation.
With two laps complete the yellows came on for Graham Murray, Jay Cardy (Cardy Racing Components) and Glen Treloar (Matt Amato Racing) who all came together in turn two, both Cardy and Murray’s races ending prematurely.
Brown would lead away Vosbergen, with Warren and Kinsella side by side, Stubber going high, drawing even, then having a moment and dropping back in behind them.
Unfortunately for Kinsella his strong run would come to an end with eight laps complete as he slowed and headed infield, seeing Brown now leading Vosbergen and Warren Oldfield, with Stubber right behind them.
Brown continued to work his way through lapped traffic with ease, but the yellows would come on with thirteen laps complete, with Stubber making contact with a lapped car and a number of cars spinning to avoid. All but Stubber were able to restart, but as is so often the case, restarts breed restarts.
The big mover on the restart was Daniel Ameduri (Ameduri Motorsports) going high, wide and handsome to move into fifth place behind fourth placed Nylander as the top three remained the same.
Back up the front and this time Vosbergen had stayed with Brown, the top two side by side for a number of laps as Warren Oldfield lurked just behind them.
Michael Holmes (Michael Holmes Racing) moved past Ameduri for fifth, then shortly after Ameduri unfortunately overcooked the model in turn three and spun, seeing himself sent rear.
Brown held back a long time on the restart and it caught a number of cars unaware, Warren Oldfield able to slide past Vosbergen for second, while Veronica McCann (Veronica McCann – Red Hot Racing) came from nowhere and was able to slot into fourth and begin looking for a way around Vosbergen.
Brown built up the lead quickly, with a lapped car playing havoc with the front runners, but somehow the field got by, Brown, then Oldfield and then McCann who grabbed third on lap twenty from Vosbergen.
A lap later the yellows were on again, this time for Luke Halliday (Ryan Halliday Racing) who came to a stop in turn four.
Vosbergen got back under McCann for third on the restart, Vosbergen then looking high and low as he tried to make his move on Oldfield for second.
The yellows then came on again as Ameduri and Nylander make contact, Nylander spinning and Ameduri sent infield under the yellow light.
The race resumed once more and Vosbergen grabbed the lead, but the start was called back. This time Brown got away again, Vosbergen only able to grab second this time around, but again it was called back as Halliday spun again, his night also ending on the infield. 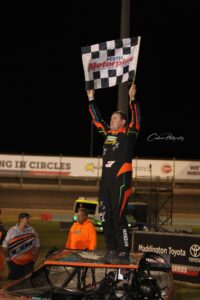 Nylander had a shocking restart, but up front there was a three car battle for the lead again, with Brown, Vosbergen and Oldfield in close quarters, with Michael Holmes and Jamie Oldfield (Oldfield Racing) now in fourth and fifth as they passed McCann.
Brown again built a gap and this time the race was able to stay green, Brown racing away with the win ahead of Vosbergen and Warren Oldfield.
Holmes, Jamie Oldfield, McCann, Nylander, Richard Wells (CTM Recruitment Racing) and Glen Treloar would round out the only finishers. 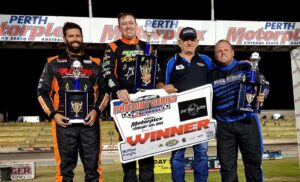