With COVID-19 bringing a premature end to the 2019/20 summer season and also halting the Winter season temporarily, drivers are chomping at the bit to get back out on track and LMRWA are pleased tonight to be able to reveal what the new season will look like.

As has been the case for many years now, the calendar will begin in October with the annual Ray Tulk Memorial to be held at Ellenbrook Speedway on the 10th of October. This event has been running since 2004 and all the drivers will certainly be looking to start the season off with a bang once again!

One week later the series heads to the Kellerberrin Speedway in what will be the first time ever that the big guns of the Pro Dirt Series have run for the season point score at the track. This will certainly see the cream rise to the top and should be a great twilight show for the LMRWA and the Kellerberrin club.

Again, there will be just a week for drivers to get ready again as the Perth Motorplex fires into action on the 24th of October with the now annual Powerpalooza Grand Opening Showdown.
The drivers will again return to the Motorplex the weekend after for the fourth Saturday in a row, this time for the Super Speedway Stampede event.

The King of Kwinana event on the 14th of November and the City of Kwinana Cup on the 21st of November will follow this, making up rounds five and six of the series.

A fortnight off will provide the perfect lead in to the John Day Classic event on the 5th of December followed by a few weeks break again, this time for the festive season before we roar back into life for the Christmas Cup at the Motorplex on Boxing Day to round out 2020.

Next up on the list would normally be the Late Model Nationals, Invasion Tour double but with questions around whether visiting drivers would be able to make it to WA to compete, the proposal at this stage is to conduct a three night Nationals event.

The first of these nights is slated to be at Ellenbrook Speedway on the 3rd of January, but this event is still to be confirmed, while the Motorplex will host the next two nights, on the following Wednesday and Saturday nights as was the case for last year’s Championship event.
From here the final four rounds of the season will be held at the Perth Motorplex: the two night show as we accompany the Australian Sprintcar Title (followed by a break in proceedings here in Western Australia to allow drivers to head East for the Australian Championships), followed by the Silver Cup on the 13th of March and then the awesome Gold Cup Grand Final, again including the retro night aspect which will bring the season to a close on the 27th of March.

This gives us a fifteen round Pro Dirt Series for season 2020/21!

As is the case so often in the world we now live in, this schedule can be changed at any time, so keep an eye on the LMRWA page for all the latest details.

At this stage though, it is full steam ahead, so let’s look forward to another great season of Late Model action here in Western Australia! 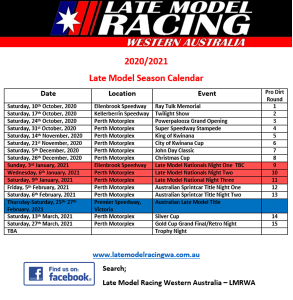