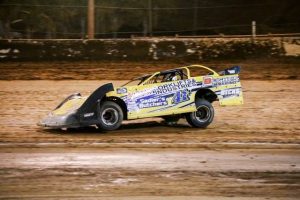 For the second time in as many nights, Kye Blight has shown his brilliance behind the wheel of a Late Model as he claimed the twenty lap feature at Bunbury Speedway in what was Night Two of the Krikke Boys Shootout doubling as round 11 of the XLI Pro Dirt Series.

Blight would start from position three in the feature event, but it would take him eight laps to work his way to the front, passing early race leader Jay Cardy to take the lead. From here he would never look back, pulling away to cross the line exactly 6.5 seconds ahead of second placed Michael Holmes, while Warren Oldfield would pass an ailing Cardy to take the final podium position on the last lap.

Michael Holmes would be the man to start off pole position and got the jump on the initial start but Cardy used the highline to his advantage to draw level down the back straight, just getting the nose in front to lead the first lap.

Blight would quickly follow his lead, moving to the highline and passing Holmes on the outside to take over the second place running.

As the laps continued to tick by the cars spread themselves out, but up front, Blight was closing on Cardy and began to look for a way through.

All it took was a sniff of the lead though and as soon as Blight got an opportunity he grabbed it with both hands, moving through and taking the lead.

A few laps later the first yellow light of the feature came on as Paul Stubber spun while running fifth, seeing Chris Pavlovich also spin to a stop as he tried to avoid him in turn one.

On the restart Blight took off but Cardy went high and allowed Holmes through for second place, but a lap later Cardy moved to the outside and retook the lead on the line. Holmes fought back three quarters of a lap later and reclaimed second once again but the move was negated as the yellows lights came on for the second time in the race with a pile of six cars coming together in turn four.

The end result of this was Jarrin Bielby up against the turn four wall while Daniel Ameduri was facing the wrong way in the exit to turn four, with Stubber, Mick Comley and Dustin Higgs also in the vicinity of the incident but able to keep going.

Holmes once again made the most of the restart and retook second place from Cardy but up front Blight pulled away yet again. The battle for second place continued to be waged as once again Cardy moved around Holmes for the position on lap fifteen.

From here the final few laps were frenetic, with a number of positional changes, but up front it was Blight who held steadfast, recording a huge win over Holmes while Oldfield snuck past a slowing Cardy for third on the final lap.

Earlier in the night the first round of heats went perfectly, but the second round saw a few more incidents: the worst being when Brent Vosbergen and Kye Blight were battling for the lead in heat three, Vosbergen ending up spinning and leaving Brad Blake nowhere to go hitting heavily in turn three. Neither car would be able restart and both were out for the night.

Full XLI Pro Dirt Points after Round 11 will be posted tomorrow morning, but at this stage it is Warren Oldfield who leads by the barest of margins: one point ahead of second placed Jay Cardy, while Michael Holmes is now in third place, while Matt Goodlad is fourth, one lonely point ahead of Brad Blake in fifth.