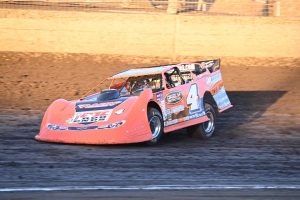 Brent Vosbergen has made his way back into the winners circle tonight at the Perth Motorplex as he grabbed the City of Kwinana Cup feature race, the seventh of his career at the venue.

Vosbergen was strong all night, claiming a win and a second place in his heats to start the thirty lap feature race from pole position alongside ‘The O Show’ Brad Blake.

Eighteen of the original nineteen drivers who started the night would start the feature, with Warren Oldfield, aboard the Michel Holmes Racing entry for the first time, the sole competitor unable to start the feature after issues in the opening heat race.

Vosbergen and Blake shared the front row, with the first start being quickly aborted as Craig Greentree and Nathan Richards spun together in the opening turns.

The second attempt saw Vosbergen get the advantage, but Blake was quick to fight back on the inside, Vosbergen powering back around the outside as he attempted to retake the lead.

Unfortunately again it was all for naught as Matt Amato came to a stop on the back straight, setting up another full restart, while Matt Nylander found himself on the infield.

Vosbergen again got the jump on the next start, with Clint Noakes also ducking by Blake into second, and despite a spin by Nathan Richards, the first lap was in the books.

Blake slowed suddenly and headed infield, his motor having expired and seeing Vosbergen now leading the orange brigade as Noakes was second followed by young gun Joe Chalmers in third and Kodee Brown in fourth. The yellows would then come on again for Greentree who spun this time in turn three.

Again Vosbergen led away, but it was Jamie Moon who made his presence felt, passing both Brown and Chalmers to move into third before spinning himself out in turn two and luckily being missed by the field as the yellows came out once again.

Vosbergen would lead away Noakes, Chalmers, Brown and now Ken Macpherson who was taking his chances to move into the top five.

Macpherson would then pass both Brown and Chalmers, with Matt Goodlad coming from the clouds to do exactly the same thing, Vosbergen leading Noakes, Macpherson, Goodlad and Chalmers with ten laps complete.

Lap thirteen would see Vosbergen in lapped traffic, while Brown would pass Chalmers for fifth.

Four laps later the yellows would be forced on once again as Brown now had a broken front end and try as he might, was unable to get a clear path to the infield.

The restart was a mess, with a number of cars making contact and Ken Macpherson the unlucky one as he was chewed up and spat out, Vosbergen now leading Noakes, Goodlad and Jason Oldfield while Jamie Moon had fought his way back up to fifth with ten laps remaining.

Noakes went high with eight laps remaining, allowing Goodlad to draw level with him, but Noakes straightened the car and powered away once again, Goodlad’s opportunity gone.

Over the remaining laps Vosbergen would continue to pull away, Noakes and Goodlad would chase hard and Ken Macpherson would fight his way back into contention, but in the end it was Vosbergen a clear winner by over four and a half seconds for the seventh time at the Perth Motorplex.

He would cross the line ahead of Noakes and Goodlad, both of whom recorded their first podium finishes in a long while, while Macpherson was fourth, Oldfield fifth and Moon sixth.

Courtesy of the nights results, the top five in the Perth Motorplex has had a shake up, Blake leading the points by thirty one markers over Ken Macpherson who has shuffled into second, while Warren Oldfield has dropped to third and Jay Cardy and Matt Amato have moved into the top five.