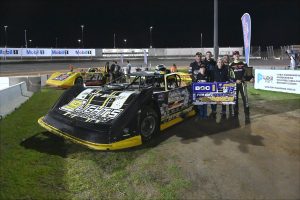 Kye Blight has again shown why he is regarded as one of the brightest young talents in Speedway today as he raced his way to the win in the Legends Night feature race in honour of Stan Starcevich at the Perth Motorplex.

Blight started off pole position for the feature courtesy of an earlier heat win and a second place. He was scheduled to start alongside former Australian Champion Kodee Brown but engine dramas would sideline him before the race began, seeing another former champion in Paul Stubber elevated to the front row.

As the race went green Blight would lea the field through the opening turns, but was quickly under pressure from Warren Oldfield and Jay Cardy.

Blight was able to survive that initial fight and began to pull away as Cardy and Oldfield continued to go at it tooth and nails, Oldfield then breaking away while just behind Cardy was Stubber and the returning Craig Vosbergen looking for a way through.

With four laps complete the first yellow light would come on as Laura Byrnes spun.

Vosbergen took the opportunity of a bunched up field on the restart, moving into third and beginning a battle with Oldfield, moving through and grabbing second on the sixth lap, while behind them Cardy was holding off Stubber and Clint Noakes.

Cardy and Stubber would then come together on lap eight which cost them some ground and allowed Ken Macpherson to get right into the thick of the action.

Macpherson got by Cardy for fifth on lap twelve, and a lap later would see the most dramatic moment of the race when Blight found himself tangling with a lapped car that caused some damage.

Though some tense moments would be next, Blight was able to rejoin the field and on the restart he led away with Vosbergen chasing hard while Oldfield, Cardy and Stubber dropped back from the lead duo.

Stubber didn’t give up though and was able to pass both Cardy and Oldfield to claim third place with ten laps remaining. Oldfield fought back a few laps later and retook third with seven to go, but Stubber again went outside and retook third by just 0.040 seconds. 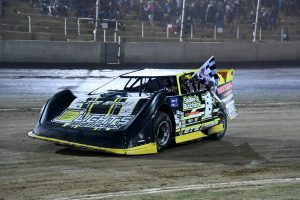 As the laps wound down Stubber and Oldfield would begin to close on Vosbergen, but they simply ran out of laps, and no one could do anything about Blight, who went on to claim his twelfth Motorplex feature win from Vosbergen and Stubber. Warren Oldfield and Cardy would round out the top five while Ken Macpherson, David Nylander (from position nineteen), Brad Blake, Jason Oldfield and Freddy Kinsella would fill out the top ten positions.

We now have a few weeks break from racing, allowing Late Models the chance to refresh and be ready to hit the track once again for the big one, the WA Title at the Perth Motorplex on the 13th of March! 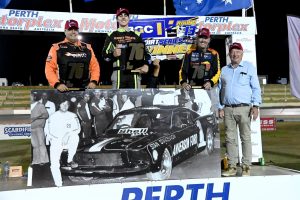