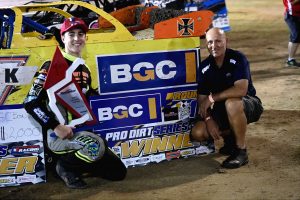 Last night at the Perth Motorplex, all in attendance were witness to an absolutely thrilling feature race that would ultimately end with Kye Blight winning the Late Model Nationals for the second year in a row.

In a race that saw multiple lead changes and some brilliant precision driving by the lead cars, Blight was simply all class as he raced from position fourteen on the grid to catch and pass both Warren Oldfield and Brad Blake to win the thirty lap Late Model Nationals feature.

With points from the Ellenbrook show carrying over, Warren Oldfield was in the box seat for the feature, with a win and a fourth in his heats cementing him pole position for the fifth time this year. Brad Blake was next to him on the front row while Veronica McCann was to come out of position three and Joe Chalmers was slated to start out of four but was an unfortunate withdrawal before the race.

Prior to the race all focus was on Oldfield and Blake: not only were they fighting for the Nationals win, Oldfield was looking to score the BGC Bonus for going back to back with feature wins in the Nationals, plus looking to keep his Motorplex winning streak alive, while Blake was looking to become the outright winningest driver at the Motorplex venue, so plenty was on the line.

Oldfield led the field into the first turn as the race went green, but Blake stormed around the outside to take over the point down the back straight and lead the opening lap.

Oldfield held down second while McCann was holding off Ken Macpherson and David Nylander in a spirited battle for third place.

Blight made his way quickly into sixth and began hounding Nylander, but the yellows came on with three complete as Craig Greentree found himself facing the wrong way in turn three.

On the restart Blake and Oldfield shot away as Macpherson made his way past McCann for third, with Nylander diving underneath her through the next turn to grab fourth before the yellows came on, with Brent Vosbergen and Matt Amato making contact, Amato spinning and being hit by Warren Minshull and Greentree.

Jay Cardy had a left rear going down on the restart and retired, with Amato also heading infield after attempting to restart after his crash.

As the race resumed it was Blake still leading while Macpherson managed to make his way past Oldfield for second place and Daniel Ameduri came from the clouds to slot into fourth.

Oldfield got back by Macpherson a lap later and began pulling away, the field shuffling constantly as Jayden Meckenstock retired, Paul Stubber spun but kept going and Kye Blight moved into fourth as he passed Ameduri.

Stubber then pulled infield after smoke emitted from his machine, but up front Blake was in heavy lapped traffic and Oldfield was able to close the gap significantly by the halfway point of the race.
Blight by this point had also passed Macpherson to grab third and had set out after the leaders and he too had closed the gap at a rate of knots, the trio separated by less than a second with ten laps remaining.

Blake was low, Oldfield in the middle and Blight high, then they switched lanes, with Oldfield going right around the outside of Blake on lap twenty three to take the lead, quickly followed by Blight. 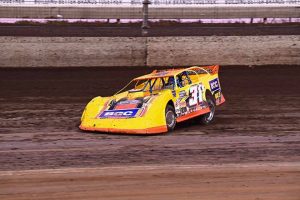 Blight went too high into turn one and Blake retook second, but Blight again fought back and grabbed the position, then looking to close the gap to Oldfield who was able to put a lapped car between them.

With five to go Oldfield bobbled, Blight went inside and grabbed the lead by 0.098 seconds. A lap later Blight got baulked in traffic and Oldfield again stuck his nose underneath, then coming out of three and into turn four Oldfield retook the lead just as the cautions came on with three laps to go for a stranded David Boyes up against the turn four wall.

This left Blight leading away Oldfield, Blake, Macpherson, Ameduri, Nylander, Brent Vosbergen, Jason Oldfield and McCann as the only cars on the lead lap on the restart.

Blake snuck by Oldfield on the restart to grab second but up front, Blight quickly put distance between himself and the rest of the field, going on to claim his second Late Model Nationals wins in as many years. 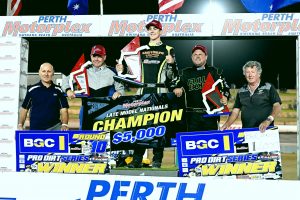 Blake would come home in second place while Oldfield would be third ahead of an impressive Ameduri and Ken Macpherson rounding out the top five.

The Pro Dirt Series major sponsor BGC had representatives of the company at the track last night, and they were so impressed with the quality of the racing that they doubled the BGC Bonus for the night, seeing Blight walk away with a cool 2k bonus!

It was a thrilling night of racing, and congratulations to all for putting on a great show in the feature event, in what was the fifth annual Late Model Nationals!

We now have a few weeks break from racing, allowing Late Models the chance to refresh and be ready to hit the track once again at the Perth Motorplex on the 30th of January for the next round of the BGC Pro Dirt Series! 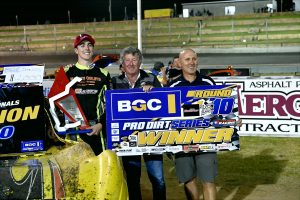