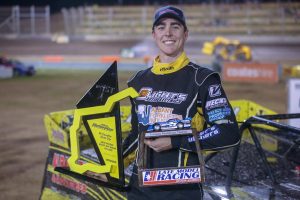 Kye Blight has tonight put on a dominant performance at the Perth Motorplex, winning both of his heat races, one of which saw him setting a new track record, starting from pole position in the forty lap Di Candilo Steel City Roof Off Roar and then leading every lap to claim the win.

It was a big meeting from the get go, with Ryan Halliday setting quickest time overall across the three groups in qualifying. He would then go on to claim a heat win, as would Brad Blake, while Blight would claim the other two preliminaries.

As the all-important, forty lap race went green Blight was immediately into the lead with third starting Brad Blake using the lowline to dart into second underneath Blight’s Marc Giancola.

Warren Oldfield settled into fourth behind Giancola, but it was only temporary as on lap two he grabbed his chance to pass Giancola while up ahead Blight was already pulling away from the rest of the field.

With five complete Blight had a two second gap on Blake who was now fighting with Warren Oldfield for second, Oldfield just making the pass and leading by 0.057 seconds at the completion of lap five.

Marc Giancola also used the opportunity to close the gap and have a look on the outside line but it all amounted to naught as the yellows came on for Simon McNab who came to a rest up against the turn two wall.

Luckily for McNab he was able to restart but pulled infield shortly after.

Blight was strong on the restart and began to pull away while Oldfield and Blake resumed their battle, Oldfield getting the best of Blake while Giancola was behind them trying to hold off Michael Holmes.

Ryan Halliday by this point was sixth after having started in position eleven due to a DNF in one of his heats.

Again Blight built up a big lead, out to two and half seconds by the completion of lap twelve while behind him Oldfield had also cleared out on Blake.

Shortly after, Blight found himself in lapped traffic but worked his way through it with ease, but behind him, Oldfield was starting to close the gap, down to one second with fifteen laps completed.

Third placed Brad Blake then got caught up with some lapped traffic which allowed Giancola and Holmes to close in on him but they were both unable to make any moves stick.

At the halfway distance Blight was leading Oldfield by just 0.442 seconds, while Giancola made his way into third from Blake, Holmes, Halliday, Jay Cardy, Ken Macpherson, Joe Chalmers and Brent Vosbergen rounding out the top ten. 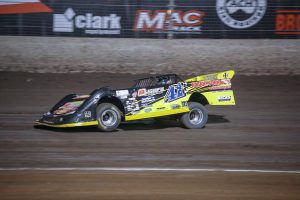 With twenty-one complete Oldfield ended up spinning after an issue with the Brent Vosbergen car, seeing Vosbergen retire and Oldfield reinstated into his position upon the resumption.

The race restarted but one lap later Jay Cardy came to a stop after he lost a tyre, ending his defense of the race he won this time last year.

The next take saw Giancola storm around the outside of Oldfield for second place, but Oldfield used the lowline to perfection in turns three and four to retain the position. Giancola didn’t give up and went back around the outside in one and two, the duo side by side as they crossed the line to complete lap twenty four, then Giancola moving ahead on lap twenty five.

A few cars came together while battling for sixth, Halliday the one who spun in turn two but he was able to keep going without causing a stoppage, Blight now leading Giancola, Oldfield, Blake and Holmes with twelve laps to go.

Lapped traffic was again the name of the game on lap thirty, with Blight getting through but Giancola able to every so slightly close the gap.

Over the next few laps and despite all that Giancola and Oldfield tried, they simply could not catch Blight, who went on to claim a convincing win, his fourth at the Perth Motorplex. Brad Blake was fourth followed by Michael Holmes and the impressive Joe Chalmers in sixth, with Ryan Halliday, Ken Macpherson, Jai Mazzini and Freddy Kinsella rounding out the top ten.

Courtesy of tonight’s results Michael Holmes still leads the Sims Metal Management Late Model Pro Dirt Series, but the margin is down to just seven points over Marc Giancola who has jumped into second place. Brad Blake is just one further point behind in third while Jay Cardy is now fourth but still well and truly in touch with the top three.

After tonight’s show the Late Models now have a fortnight off before another big event, the WA Title at the Perth Motorplex on the 30th of March! 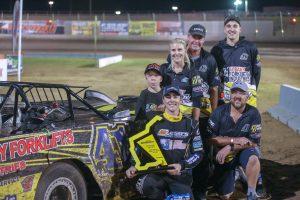