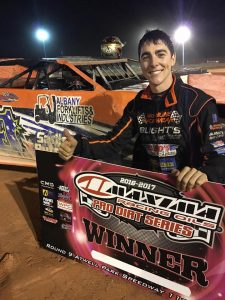 Last season was a big one for Kye Blight. He claimed a feature race win, finished on the podium on three other occasions, grabbed no less than seven heat race wins and by virtue of his consistency, was second overall in the Pro Dirt Series by just one singular point. Despite all this though, Blight is hungry for more and will be throwing it all on the table this season in his quest for more wins.

“It’s hard to complain about a season where we missed out on winning the Pro Dirt Series by one point,” he says, “but I feel we left so much on the table. Our consistency is an area we are really focusing on this time around and perhaps even missing shows to have our stuff 100% ironed out is something we need to look at. Our maintenance program was really good, but we just tried so many things on the car last year that some nights I feel I really let our sponsors and the team down.”

Despite those feelings, the results speak for themselves and this season will see Blight working hard to grab more big wins.

“This season we plan on hitting more of the big races,” says Kye. “Our new car won’t be ready for the beginning of the season, so we will test some before breaking it out at the November meeting at the Motorplex. I also really want to put our best foot forward at the Invasion tour, the Australian Title and the now two night state title.  They are the shows I’m really keen for!”

Indeed, this means that Kye will be doing some travelling, firstly around WA for the Di Candilo Steel City USA Late Model Invasion Tour, then across to South Australia for the National Title. This along with Pro Dirt Shows will see him once again kept busy, but his aim is clear.

“Because we aren’t points racing this season, I’m really aiming to win some races. The competition is so darn tough here, but I really believe that I have the best team in the pit area and if I step up and drive the car better, we have every opportunity to be knocking on the door.”

Kye speaks incredibly highly of his team, thanking all those behind him including Graeme and Linda McSweeney from Albany Forklifts and Industries, who he says have really stepped up their involvement this season and can’t thank them enough, as well as Blights Auto Electrics, Sadlers Butchers, Moyle Race Engines, Down Under Graphics, Becks Transport, Longhorn by Snellen, Dan Lucas Enterprises and Motorsport Promotions.

“I’m so privileged to have a great team behind me. My dad got to spend some time in America this off-season and he is so keen to implement all he learnt. Of course my fiancé Jaimie is one of the hardest workers I know and my Mum is one of the toughest, so I’m very lucky to have two great women in my life.”