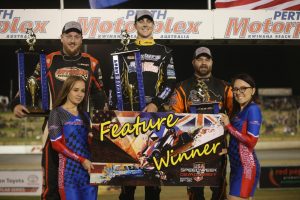 Kye Blight has tonight made it two feature wins in a row and got himself into the best possible form ahead of the Australian Championship as he defeated a full field of cars to claim his sixth Perth Motorplex feature win, fifth in a Late Model.

Blight was solid in his heats, claiming a win and a fourth place to start the feature from position five while Ryan Halliday, who scored a win and a second place would come from pole position. He was joined on the front row by Ken Macpherson (a win and a third place in the heats) while the second row was filled by Warren Oldfield and Jay Cardy.

Twenty four cars would start the feature but up the front the battle was between Halliday, Cardy and Macpherson, Halliday leading the group.
The first yellow light of the race came after just two laps, Simon McNab coming to a stop in turn four.

On the restart Cardy grabbed the lead, with Macpherson also racing his way through into second as Halliday dropped to third.
Kye Blight was on Halliday’s tail and soon ducked underneath him to grab third on lap five.

Behind the top four was a five car battle for fifth, but just as it was getting interesting Halliday found himself spinning to a stop in turn four with six laps completed, the battling pack lucky to avoid him.

The race resumed again and this time Blight and Cardy pulled away as they fought for the lead, Cardy with the edge on Blight, while Joe Godsey made his way into fourth and began pressuring Macpherson for third.

Freddy Kinsella too was making moves, grabbing fifth from Warren Oldfield. The yellows then came on again, this time for Lee Redmond who spun in turn four.

Again Cardy and Blight fought for the lead as the race resumed, this time Blight getting the nose in front to lead lap eleven by just 0.018 seconds. Godsey also took his opportunity and grabbed third from Macpherson.

Macpherson fought back and retook the position on lap thirteen, but behind them was another pack of cars including Kinsella, Brad Blake, Michael Holmes and Warren Oldfield looking for a way through also.

Lapped traffic would come into play on lap nineteen, Blight using the highline to negotiate his way around as Cardy dropped back slightly, but still stayed in range and was ready to pounce at any given opportunity.

Over the next few laps the field began to spread out a little, but with twenty six laps complete Michael Holmes spun in turn four and despite his best attempts to keep the model going, the yellows had to come on.

This set up a four lap restart, with Blight leading away Cardy, Macpherson and Godsey.

Warren Oldfield was the one who made the most of his opportunities, using the highline to rocket into the top five. Back up front though it was all Blight, going on to defeat Cardy while Joe Godsey made a last lap pass to grab third from Macpherson. Impressively, twenty one of the original twenty four cars who started the feature, finished the race. 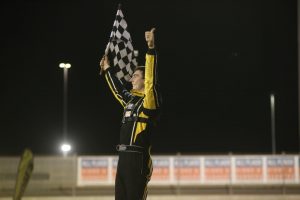 Warren Oldfield has now taken the lead in the Perth Motorplex Track Championship, nineteen points ahead of Cardy while Giancola is a further two points behind and Holmes another four markers back in fourth.

Looking at the Carbusters Pro Dirt Series, it is now a tie for the lead, with both Warren Oldfield and Michael Holmes on 814 point. Marc Giancola is 33 points further back in third while Jay Cardy and Freddy Kinsella round out the top five.

The Late Models now have the next thirteen days to prepare for the big one, the Australian Late Model Championship, which kicks off at the Perth Motorplex on Wednesday the 8th of January, with the event set to wrap up with the final on Saturday the 11th of January.

Stay tuned over the next few weeks as we release all the details including the field, the format and the festivities that will surely make this one of the best Australian Late Model Championships ever held! 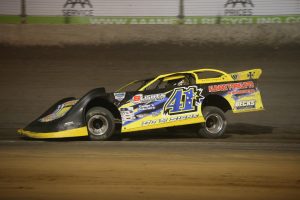