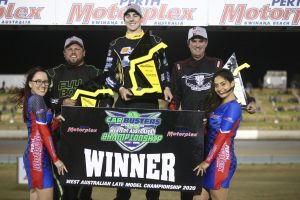 Australian Champion ‘The Highlight’ Kye Blight has bought his season to the best possible conclusion tonight at the Perth Motorplex as he claimed his first WA Late Model Championship to go with the National crown he won just a few weeks ago.

The win in the thirty lap feature race did not come easily, but Blight fought hard to claim what was his seventh win in a row this season and his ninth career Perth Motorplex feature victory.

Twenty seven cars started the night and with all the preliminaries out of the way, the top twenty four drivers would start the feature, with father son duo Craig and Brent, the defending WA Champion, sharing the front row.

As the race went green Craig would only just edge out his son, the duo side by side as they crossed the line for the first time while Jay Cardy and Warren Oldfield were side by side for third.

Craig would control the pace for the opening few laps, Brent making a quick attempt at the lead, but the yellows would come on for a slowing Simon McNab with four laps complete.

The next restart would see a big incident as Joe Godsey, who was running sixth, spun, just missing Veronica McCann and then seeing Ken Macpherson, Freddy Kinsella, Jason Bond, Bruce Mackenzie, Kye Blight, Michael Holmes and a few other cars all pile in.

Macpherson, Kinsella and Godsey were the three unlucky ones unable to restart with twenty one cars still remaining with twenty six laps left, a number of which had damage due to the incident.

Blight was the big mover on the restart, charging around the outside into fifth place as Brent grabbed the lead from Craig.

A lap later Blight was in fourth after passing Warren Oldfield and ahead was Brad Blake and Craig Vosbergen, two old sparring partners going at it as they had so often done before.

All of a sudden, the unthinkable happened. Brent Vosbergen who was leading by nearly two seconds, spun going into turn four, and just as Brad Blake was using the inside line to pass Craig in the middle and Blight on the outside, he was left with nowhere to go and cannoned into the side of the stricken Vosbergen machine, bringing the race under red light conditions.

After a short delay Blake emerged from his car to the applause of the crowd, but his race was over, as was Brent’s Title defence.

Seventeen cars would restart with Craig leading Kye and Warren, but the yellows came on for Nathan Callaghan who spun, Craig Vosbergen slowing up high, with Cardy getting caught up behind him as teams continued to fight their way forward under the yellow light.

The next stoppage was as Giancola and Nylander came together in turn three, Nylander suffering the brunt of the incident and his race also ending early, joining the gaggle of cars on the infield.

Fourteen cars would resume with twenty two laps to go, with Warren Oldfield making the most of his chances to pass both Vosbergen and Blight to take over the lead. Vosbergen then retired on lap ten, while back on track Oldfield ran low and Blight ran high as they battled for the lead, Blight claiming the lead on lap twelve.

Back to his spoiler destroying best, Blight then began to pull away as behind them Paul Stubber worked his way into third followed by Ryan Halliday, Michael Holmes and Jai Mazzini who had come from the B Main to fifth before being passed by Holmes and dropping back slightly, eventually being lapped.

Indeed, Blight made his way into lapped traffic on the sixteenth circulation, but it didn’t slow him down in what was the longest stanza of the race, and as cars dropped around him (there were ten cars remaining on track with ten laps left to run) it looked like he would have it all his own way once again on the run to the chequered flag.

Unfortunately that wasn’t quite the case, as Michael Holmes spun while running fifth, setting up a green, white chequer finish.

The race resumed and this time it was Ryan Halliday and Paul Stubber fighting hard for the final podium as the race restarted, the duo making contact and Halliday spinning and the yellow lights coming out once again.

Stubber retired infield and only a handful of cars would greet the final flag, Blight claiming the win ahead of Oldfield and Halliday. Veronica McCann was the only other car on the lead lap in fourth in what was a great night for her, while Jai Mazzini and Daniel Ameduri both advanced sixteen positions to finish one lap down each in fifth and sixth respectively. New South Welshman Bruce Mackenzie was also one lap down in seventh while Nathan Callaghan rounded out the finishers two laps down. 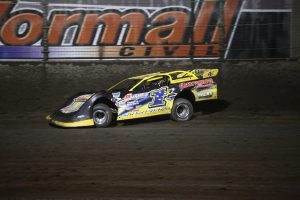 Late Models will return to the track in just a couple of weeks’ time as Late Models will be part of the World Series Sprintcars show, which is sure to attract big car numbers and big crowds in what will also be the fourteenth round of the Carbusters Metal Recycling Pro Dirt Series!