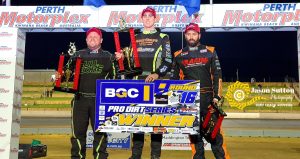 Kye Blight has tonight again shown he is one of the strongest Late Model competitors in recent memory as he claimed yet another feature win at the Perth Motorplex, but this one certainly didn’t come easy!

Kye was dominant through his heats, claiming two wins from two starts, but doing the same was Brent Vosbergen, the duo picking up their battle from Albany again last night and sharing the front row for the thirty-lap feature race.

Blight led Vosbergen and Warren Oldfield into the opening turns, but the yellows came on quickly for Shaun Cubbage who lost a wheel in turn one.

The second attempt saw Blight again lead but Oldfield snuck by on the inside of Vosbergen for second, Vosbergen quickly fighting back and reclaiming the position.

Vosbergen chased down Blight on lap two, the duo side by side as they crossed the line for the next couple of laps.

Blight would then manage to pull away slightly, Vosbergen settling into second followed a way back by Warren Oldfield while Jamie Oldfield and David Nylander would wage war for fourth place, swapping positions numerous times before Jamie finally got the advantage.

Lap twelve saw Vosbergen close the gap on Blight once again, the two separated by 0.076 seconds, then Vosbergen grabbed the lead on the thirteenth circulation.

The duo would close in on lapped traffic shortly after, the extra cars giving them less room to move, but still they battled with each other, Blight going back around the outside on lap seventeen to retake the lead.

With ten to go the duo were in thick lapped traffic and still Blight held the advantage, but only just, Vosbergen doing all he could to get by.

As the laps wound down Blight began to reassert his authority, pulling away from Vosbergen while Warren Oldfield was a distant third.

All of a sudden, Vosbergen had closed the gap once again and was right on Blight’s tail with only a few circulations remaining. With two to go Vosbergen dived underneath Blight in turns three and four, sparks flying and the two cars making contact; Vosbergen just 0.049 behind Blight at the flag and then grabbing the lead with one to go.

Vosbergen would go on to cross the line first but was then relegated two positions for the pass, seeing Blight declared the winner from Warren Oldfield and Vosbergen.

The win was Blight’s fourteenth at the Perth Motorplex and his fifth for the season, but the real story was that not only did Oldfield seal his sixth Pro Dirt Series win (in nine years!) ahead of Ken Macpherson and Jay Cardy, but that he also stole the Perth Motorplex Track Championship right at the last second!

Coming into the feature race Ken Macpherson and Oldfield were actually tied on points, so with Oldfield coming home second and Macpherson finishing tenth, Oldfield won the championship.

A full wrap up of the season, including a round recap and season statistics will be posted in coming days, but for now, attention will turn to the Awards Night, to be held on May the 1st, where we finally get to crown all our winners from season 2020/21! 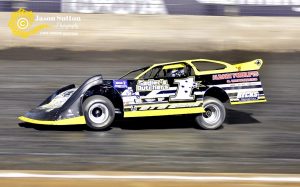