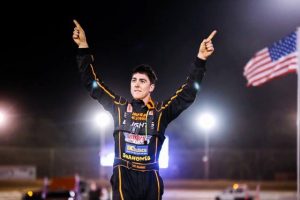 Kye Blight has tonight claimed his second feature race of the season with a dominant win at Bunbury Speedway in round ten of the XLI Pro Dirt Series, in what was doubling as Night One of the Krikke Boys Shootout.

Blight was all class in a race punctuated with red and yellow light stoppages, starting from pole position, and getting the initial jump from fellow front row starter Brad Blake. The top two began to pull away while Jay Cardy settled into third ahead of Michael Holmes.

With one lap complete the yellows came on as Brent Vosbergen spun in turn two, with Matt Goodlad, Jamie Moon, Craig Vosbergen and Veronica McCann all getting involved and coming to a stop, McCann the only car unable to restart.

On the restart Blight would pull away with Blake following, while Warren Oldfield made a move to grab fourth from Holmes.

With two laps complete all of a sudden Jamie Moon spun, a number of cars piled in, and Simon McNab was left with nowhere to go, appearing to ride a wheel and roll heavily in turn two. After a delay to get Simon out he was able to walk away and the race would resume once again.

Again Blight pulled away on the start, with Blake attempting to stick with him as Oldfield applied the blowtorch on Cardy for third. Behind them Paul Stubber was charging through the field from position fourteen, into fifth place on lap five just as Oldfield got underneath Cardy for third.

Stubber then moved underneath Cardy on lap seven to take over the fourth place running, but up front Blight had pulled away by over five and a half seconds from second placed Blake, who was now under siege from Oldfield.

Just as the race was to reach the halfway point Jarrin Bielby spun in turn two, bunching the field up once again on another restart.

As the field came round to take the green once again, it appeared that something broke on Daniel Ameduri’s car, seeing him slow and Craig Vosbergen and Mick Comley both forced to take evasive action, spinning sideways across the defenseless restart cone and then onto the infield, the yellows coming back on straight away.

The next attempt at a start was much more successful as Blight led away once more, Blake coming under siege once again from both Oldfield and Stubber as they used both the high and low lines to find a way past.

Holmes made the pass on Cardy for fifth as Stubber went high on Blake for second in a move that nearly worked, Blake somehow able to power back. A lap later, with seven remaining, Stubber tried the same move and this time it worked, shooting around his outside to take second, while one lap later Oldfield moved under Blake to grab third.

From here the only other change to the order was Cardy moving back by Holmes for fifth on lap seventeen, with Blight cruising away to grab the win ahead of a hard charging Stubber, while Oldfield would officially be third.

The only incidents from the earlier heats was in the opening heat when Brad Blake and Simon McNab came together on the back straight with both lucky to avoid any significant damage, while in heat two Paul Stubber went wide in the same place, hitting the wall and ending his race prematurely. All cars were able to be repaired in time for the final round of heats.