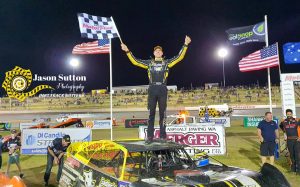 Australian Champion Kye Blight has finally put all his mechanical woes behind him and bounced back to claim a strong feature win tonight at the Perth Motorplex as part of the annual Boxing Day celebrations, doubling as Round Five of the BGC Late Model Pro Dirt Series.

Blight was strong all night, claiming a heat win and a second place to start on pole position for the feature race. Equally as impressive was Ken Macpherson, campaigning a brand new car tonight and also winning a heat race and finishing second in the other to start alongside Blight in the feature.

Unfortunately for Macpherson his epic night went very, very wrong as the feature began, with Macpherson spinning, then being collected by a whole gaggle of cars that saw him flip upside down and land on his roof.

After a delay, the race would have a second attempt at a start, with Blight leading away Brent Vosbergen, back aboard his familiar #4, and Ryan Halliday, who was holding off a determined Paul Stubber and David Nylander.

Warren Oldfield would then pass both Nylander and Stubber to move into fourth with three laps complete.

Back up front Blight was building a gap on Vosbergen, while Halliday was doing all he could to chase down Vosbergen, with Oldfield behind him looking to do the same.

Lapped traffic came into play on lap seven, but Blight continued to cut through it like a hot knife through butter, Vosbergen unable to make any ground.

At the half way distance though things began to change, Vosbergen all of a sudden significantly closing the gap until again he got caught in traffic, seeing the gap widen once again.

Daniel Ameduri then spun in turn three with nine laps remaining, which was followed by a very ordinary restart with cars going everywhere.

The next stoppage would see a rare spin by Halliday, with Nylander, Meckenstock, Moon, Chalmers all involved.

Finally, with nine laps still remaining, Paul Stubber lost a wheel going down the back straight and the race was declared, Blight officially the victor from Vosbergen and Oldfield, with Joe Chalmers charging from position twenty to fourth while David Nylander rounded out the top five. 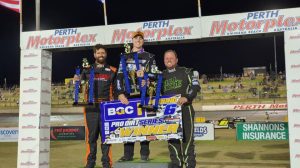 The next event for the BGC Pro Dirt Series will be in just a week’s time, with Ellenbrook Speedway hosting us on Saturday the 2nd Of January for what will also be the first round of the Late Model Nationals!

From all of us here at the LMRWA, we wish you a happy and prosperous New Year and look forward to seeing you at the track safely next year! 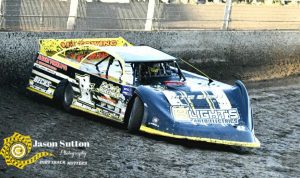