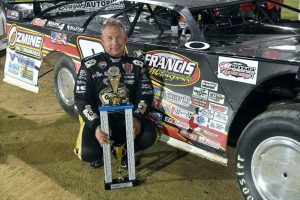 With the Boxing Day Bonanza now in the books for the XLI Late Model Pro Dirt Series, teams and drivers attention now turns to the Di Candilo Steel City USA Invasion tour set to commence on the high banks of the Perth Motorplex with the Di Candilo Steel City Late Model Nationals on January 13 and 14. Before the chaos of the Invasion tour sets to commence, we will send you back in time to last year’s event where Steve Francis went undefeated in what was one of the most exciting series to date.

The opening nights action at the Perth Motorplex for the inaugural Late Model Nationals saw Steve Francis once again show why he is a world renowned driver as he dominated the night’s proceedings to go through undefeated and record his eleventh straight feature win here in Western Australia.

Twenty three of the original twenty five starters of the night took the green flag in the feature, with American Jason Fitzgerald damaging a piston in the Halliday Racing #7 machine in his opening heat while Brad Ludlow had a spectacular engine fire while he was leading his second heat, leaving both unable to make the call. Despite twenty three cars jostling their way around the high banks of the Perth Motorplex for prime position, it was Francis who quickly began to race away from Craig Vosbergen and Devin Moran.

As the race wore on, Moran took the opportunity to begin challenging Vosbergen for second, making the move stick shortly after, while Kye Blight took his opportunity a couple of laps later and moved past Vosbergen for third, while further back Michael Holmes also began moving his way forward into fifth position.

As had been the case all night, Francis again pulled away with Moran hot on his heels. Behind them though the battle was on as Michael Holmes first battled Vosbergen and then Blight to grab third place in the dying stages, with Francis going on to record yet another feature victory in Western Australia, this time ahead of Devin Moran and teammate Michael Holmes.

On the final night of the Late Model Nationals, Francis returned to the track as high point’s man, set the fastest time 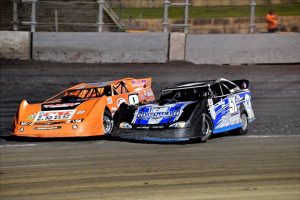 in hot laps, led every lap of his heat and then claimed the pole position in the top ten knockout, despite Craig Vosbergen leading one of the two laps in the final battle. On top of all this, despite pressure from Devin Moran, Francis would every lap of the forty lap feature event, lapping eleventh place and going on to record the win, being undefeated throughout the entire weekend.

Francis started from pole in the feature alongside Vosbergen, but it took three attempts for the race to get underway as firstly Simon McNab and then Hayden Norman spun their machines at different points before a lap could be completed. Behind him though, Moran was applying the blowtorch to Vosbergen and after a few laps of attempting a pass, it finally came off and Moran was through into second place.

Kye Blight had moved into fourth on lap twenty two while the third American in the field, Jason Fitzgerald who had damaged a piston on the opening night and worked through the night to source and fit another engine in time to compete, had moved into position seven after starting from fourteenth. Unfortunately for Blight his run came to an end a few laps later as he went high on lap twenty nine and clouted the wall, causing him to slow and with the amount of traffic on the track he was unable to get off and the yellows lights came on once again.

Francis would once again lead away Moran, Vosbergen, Stubber and Holmes, with Fitzgerald now in sixth and ‘Red Hot’ Veronica McCann having a great run to move into seventh. From here the order would remain unchanged and Francis completed a perfect weekend as the winner of the Late Model Nationals, doubling as the first round of the USA vs WA tour. Second across the line was fellow countryman Devin Moran while Craig Vosbergen was the first West Aussie home in third. 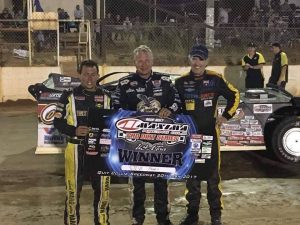 Round Two of the 2017 series would send us to Coal Country and the Quit Collie Speedway but it would be the same outcome for Steve Francis, taking the victory in style.

The race was quickly come to a halt after Craig Vosbergen made an uncharacteristic mistake from his fourth starting position and spun, going backwards into the turn one wall. Behind him cars went every which way to try and avoid him and the other cars that got involved and most did a good job, but unfortunately three cars were eliminated.

Veronica McCann who had been having another good night, the Quiet Achiever Matt Goodlad and one of the pre-race favorites in Jamie Oldfield with a flat tyre were all eliminated before they got to complete a lap in anger.

Paul Stubber moved into fourth place and began to challenge Cardy for the final podium position. Unfortunately he and Cardy then came undone, bringing the yellows out with five laps completed. Luckily for them, stewards were unable to determine the cause of the accident and reinstated both in their positions upon the resumption of the race.

The yellows came out again after Kye Blight, who had closed on Cardy for fourth, spun after contact, with Cardy sent to the rear for his part in the incident. The luckless Fitzgerald was holding down second on lap thirteen before he too slowed and headed infield as the fifth retiree of the race, with Stubber elevated into second and the hard charging Devin Moran moving from position fourteen to third.

The battle up front started to intensify as firstly Moran got past Stubber and then Blight began applying the pressure for the final podium position. But it was all Francis who was too strong yet again, taking the win comfortably in front of Moran and Stubber who rounded out the podium.

As the race went green it was Francis who got the jump and lead away Devin Moran at the completion of one lap. As the field came around to complete lap two, Wade Carter spun, leaving Chris Pavlovich nowhere to go but into his side, with Michael Holmes also getting involved. 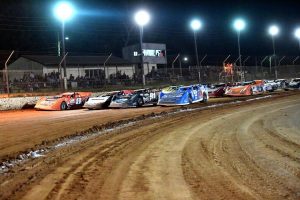 The race would restart again and this time it would go for the next twenty nine laps without a stoppage, though there were several near misses. The first incident came shortly after the first yellows, with Pavlovich half spinning and hitting Matt Goodlad before he headed infield as Goodlad continued on, albeit after dropping a few positions.

Stubber meanwhile set out after Francis, closing the gap from 2.007 seconds to 0.832 seconds in just one lap, then sitting right on Francis’ tail at the completion of lap eight. However, as Stubber was chasing Francis, Moran had also fought back and passed Stubber a lap later to reclaim second.

Francis would continue his ascent through lapped traffic, lapping seventh place on lap fourteen, Behind him Stubber and Moran continued to fight it out, with Moran utilizing the lapped traffic to his advantage and grabbing second once more on lap seventeen.

From here it was all simply elementary as Francis continued to not only race away from second and third, but to lap every car including fourth place, with Francis crossing the line to win the thirty lap feature ahead of Moran and Stubber, the only three cars to still be on the lead lap.