Francis however, didn’t have it all his own way, crossing the line ahead of Jamie Oldfield, with Jeep Van Wormer in third, having lapped all but the top three cars.

As the field lined up for the four wide salute, Devin Moran, who was slated to start out of position three, appeared to make contact with another car, leaving him without a front left wheel and seeing him parked on the infield before the race began.

Francis assumed the lead at the drop of the green, with Jamie quickly settling into third, while Jeep Van Wormer moved into third place closely followed by Jason Oldfield. After just five laps, the leading group found themselves in heavy traffic and this is where the top three in particular began battling it out in incredibly close quarters. 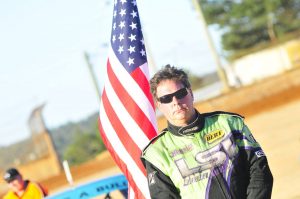 With fourteen complete Francis was forced wide in the traffic and this gave Jamie the opportunity he needed, ducking through to grab the lead. By the halfway point the leading trio were still locked together, until Van Wormer went high in turn one and clobbered the wall, seeing him drop back from the leading two, who then began an epic battle.

The two lead competitors swapped the lead numerous times, with Francis only officially back in the lead with four to go. From here he went on to lap fourth and fifth placed Brad Blake and Jason Oldfield as he raced his way to victory in what was truly an incredible feature race.

Steve Francis went back to back to kick off his 2015 campaign, this time lead two of his fellow countrymen to the line in round two of the Rando Cane Furniture USA Invasion Tour at the Quit Bunbury Speedway.

Jeep Van Wormer led the race as the green flag dropped and held onto it for a few laps as Francis bade his time, sitting behind Van Wormer waiting for the passing opportunity to strike. He moved outside Van Wormer on lap three, the two fighting side by side, before he pulled ahead as the fourth lap was complete and from here he worked to open up the gap.

Despite a handful of restarts, during each of which that Van Wormer would apply the pressure, Francis kept his calm, driving away each time. Behind the leading two, Devin Moran was able to move his way into third to complete the American Trifecta. 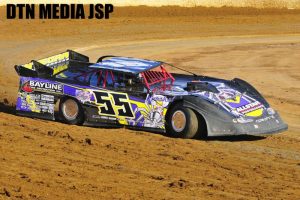 The American domination of the Rando’s Cane Furniture Invasion Tour has continued during round three at Attwell Park Speedway in Albany, with the touring team going almost undefeated during the night. Not one Aussie was able to break through for a win in the heats, Steve Francis claimed his third feature from three starts so far and the podium was rounded out once again by Americans.

Francis, as he has become known for, drove a calculating race, sitting behind pole sitter Jeep Van Wormer for only a short time before making his move. The leading duo was into lapped traffic by lap five and then went on to survive numerous restarts, with Francis claiming the win from Van Wormer. Fellow countryman George Lee had his best result for the series to date, challenging Van Wormer at various stages during the race, but ultimately being forced to settle for third place.

Francis survived a hairy moment with a lapped car to bring on the yellows, then a questionable pass further back in the field left Jay Cardy and Marc Giancola on the infield with damaged cars in another stoppage. But it was all Francis, crossing the line ahead of Van Wormer and Lee. 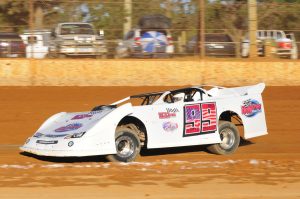 Steve Francis rounded out his Australian campaign in the best possible fashion last night at Manjimup Speedway as he claimed his fourth feature race in a row and in the process clinched the 2015 Rando’s Cane Furniture Invasion Tour.

Francis was simply in a class of his own in the feature, making the most of his front row start to race away with each start. The first attempt saw a few cars make contact, resulting in Devin Moran’s left rear tyre going flat and ending his race early. The next start went for just a few laps and Francis had built up a huge five second lead when he was bought back to the field after Craig Vosbergen slowed.

In the end though it was all Francis as he crossed the line first, recording his fourth feature win from as many starts. Jeep Van Wormer must be sick of seeing the rear of the Francis machine as for the third time in as many races he came second, while Jamie Oldfield claimed the final podium position.