Steve Francis started where he left off in 2013 by taking out the opening round of the 2014 Moyle Engines USA Invasion Tour at Quit Collie Speedway on Friday January 3.

In what many described as a dominating display, Francis led the thirty lap main event from start to finish aboard his Ozmine Racing USA16 BWRC, only being brought back to the field courtesy of a few stoppages throughout the main event. 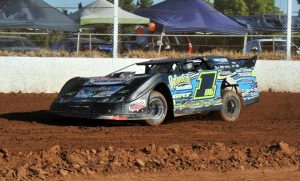 American Steve Casebolt who was visiting Western Australian for the first time struggled throughout the night with car issues and started the A main from near the rear of the field.

Francis again got the initial jump at the start of the main event with a huge multi car accident occurring mid pack with cars going in every direction.

Phil Zuidema ended up on top of Warren Oldfield’s car on the main straight with many other cars caught up in the incident. Both Zuidema and Oldfield would restart with Nat Muir and Canberra’s Scott McPherson unable to restart with too much damage.

Francis would yet again get the jump on the field and lead the early laps from Giancola, Blake with American Jeremy Payne moving from sixth into fourth place. American Steve Casebolt retired after five laps with the race settling into a steady pace.

Jay Cardy and Phil Zuidema would come together mid race with Zuidema spinning across the track and being collected by Brad Boley in the process.

Francis would go on to win the opening night of the 2014 Moyle Engines USA Invasion Tour from his fellow countrymen Jeremy Payne, Brad Blake, Lee Watt and Koran Atkinson rounding out the top five.

Steve Francis has continued his dominance of the 2014 Moyle Engines USA Invasion Tour with a resounding victory in the second round at Manjimup Speedway on Saturday January 4. 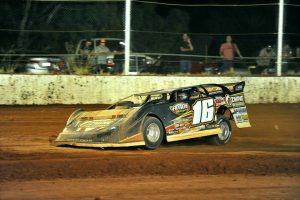 Eighteen cars would start the main event on a perfectly manicured racing surface with Francis leading the early laps with Casebolt in hot pursuit. Jeremy Payne would be shuffled back a few positions as the race settling into a pattern.

Very quickly Francis would be lapping cars with ease as he flew around the fast wide open Manjimup Speedway. Casebolt would begin to lose ground to the leader & fall into the clutches of Brad Blake with Craig Vosbergen working his way into fourth place.

Casebolt would lose second place to Blake as Jason & Warren Oldfield tussled with Jeremy Payne for the minor placing’s.

Francis would survive the green white chequer to win the second round of the Invasion tour from Blake, Vosbergen, Jason Oldfield & Warren Oldfield rounding the out the top five.

Francis led the thirty lap main event from start to finish and showed the Western Australian public why he is considered one of the world’s best Dirt Late Model drivers.

Twenty Four Late Models were on hand for the third and final round of the Moyle Engines USA Invasion Tour with the race meeting ran in scorching hot temperatures.

Americans Steve Francis and Steve Casebolt would share the front row with Casebolt getting the initial jump. Casebolt lead for the first two corners before running wide and handing Francis the lead. 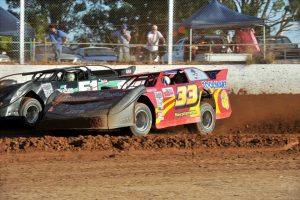 The race settled into a pace with Francis pulling away from Casebolt, Jason Oldfield, Craig Vosbergen, Brad Blake and Jeremy Payne.

Jeremy Payne and Brad Blake would make contact coming into the main straight with Blake falling through the field.

A late restart would be called for debris on the racetrack and Payne would be put back two positions at the restart for his part in the incident with Blake.

Francis would go on to win the final round of the Invasion Tour comfortably over his countrymen Steve Casebolt. Craig Vosbergen would be the first Western Australian driver to cross the line holding off the fast finishing Jeremy Payne who rebounded to finish in fourth place.

Photos thanks to Peter Roebuck.