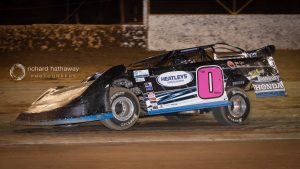 In front of his hometown crowd, Brad Blake has tonight made every post a winner as he won both of his heats then grabbed an impressive win in the thirty lap feature race at the Krikke Boys Shootout, doubling as Round Nine of the Sims Metal Management Late Model Pro Dirt Series.

Blake was all class all night and in the process bagged perfect points towards the overall series, in which he has now leapfrogged into equal third place with Marc Giancola, just a handful of points behind second placed Jay Cardy and leader Michael Holmes.

The first start of the feature didn’t go well, with Freddy Kinsella, who up until that point was having the best run of his Late Model career and qualified out of position four for the feature, came to a stop and brought out the yellows.

The second attempt at a start saw Blake quite simply race away from the field with Brent Vosbergen and Kye Blight battling it out for third.

Paul Stubber, running seventh at the completion of lap one, then spun in front of the rest of the field in turn one, with Jamie Moon climbing over the side of him, launching into the air and continuing on, with Michael Holmes then ploughing in with nowhere to go, losing a wheel and bringing out the yellows with one lap complete. All three cars would be eliminated from the race.

Blake would again lead the field away, with Kye Blight and Warren Oldfield both making big moves to pass Vosbergen for second and third respectively.

Blight then moved to the highline and chased down Blake whose big gap all but disappeared in the matter of half a lap, then all of a sudden got by him on the line to complete lap three.

Blake fought back and retook the lead on lap four, the top two cars pulling away from the rest of the field which was led by Vosbergen who had passed Oldfield once again for third.

Blight once again reclaimed the lead on lap five, with Blake in close proximity looking for a way back through but unable to get the job done.

This time Blight led away the field, Blake close behind in second followed by Vosbergen and Oldfield and Giancola who continued to swap positions.

Over the next few laps cars would start to sort themselves out and spread evenly around the track, with lapped traffic eventually coming into play on lap sixteen.

Blight however was not deterred, making his way through cleanly before all of a sudden he made a slight mistake that allowed Blake to once again close the gap with twelve laps remaining. Blake went low, Blight high and Blake was able to retake the lead once again on lap nineteen, the fifth lead change for the race.

With eight laps to go and while running fourth Marc Giancola headed infield, while a great three car battle was developing between Ken Macpherson, Freddy Kinsella and Joe Chalmers for fifth.

Blake was able to close on the three battling cars but the laps wound down before he could pass them, coming home a clear winner ahead of Blight while Brent Vosbergen was a lonely third.

Warren Oldfield was fourth followed by Ken Macpherson, Joe Chalmers and Freddy Kinsella as the only other cars on the lead lap.

The Late Models will now have a short break before returning to action at the Perth Motorplex for what is set to be another huge show on the 16th of March. 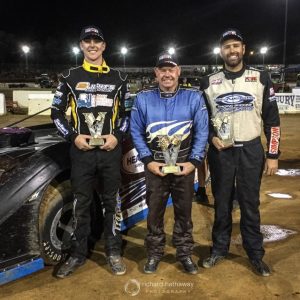