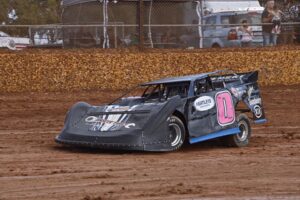 After a big night of racing action at the Allwest Plant Hire – Ellenbrook Speedway, it was Bunbury veteran, ‘The 0 Show’ Brad Blake who kept himself towards the pointy end of the field to claim his third Ray Tulk Memorial for Late Models!
Blake would lead every lap in the feature en route to victory after earning the right to start off the front row for the twenty-five-lap event with a win and a second place in the heats.
He would be joined by pole sitter Jamie Oldfield (Oldfield Racing), who had a faster overall time than Blake after he too recorded a win and a second place in his heats.
Other heat wins were claimed by Jay Cardy (Cardy Racing Components) and Paul Stubber.
As the race went green Blake would lead Jamie, with Stubber and Cardy fighting it out side by side for third place, while behind them brothers Jason and Warren Oldfield were also engaging in a close battle.
Stubber would dispose of Cardy on lap two and chase after Jamie Oldfield, and with five laps completed, Jamie would be running right on Blake’s tail with Stubber less than a car length behind them.
At this point, Blake was running the middle line, Jamie was slightly higher and Stubber running even higher up towards the fence, doing everything he could to make his way past. Coming into turn two with seven complete Oldfield appeared to slow, with Stubber reacting quickly and spinning the model to bring on the yellow lights. Stewards deemed it to be a racing incident and Stubber was put back into third on the restart.
Several cars came together as the race went to resume, seeing the yellows come straight back on, all cars able to right themselves and re-join.
The next attempt was much better, and the big mover was Jason Oldfield who suddenly found himself in third place. 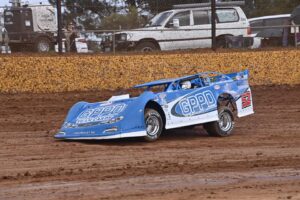 Jay Cardy then applied pressure on Stubber for fourth as Jason Oldfield began to look for a way past Jamie for second while Blake continued on his merry way out front.
On lap eleven Jason would use the bottom line to grab second from Jamie, and just three laps later Jamie Oldfield’s machine began emitting a huge plume of smoke which saw his race end prematurely.
The next half of the race would be nothing short of absolutely intense, with a number of battles raging through the field, a few position changes, side by side racing and an approaching curfew and a threat of rain all adding to the excitement.
Blake however remained tough throughout it all, going on to claim his third Ray Tulk Memorial race and kick starting his season in the best possible fashion with an incredibly strong performance that showed that the veteran still has it! 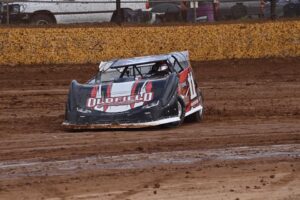