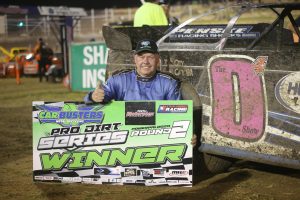 Brad Blake has tonight claimed a spectacular feature race win at the Perth Motorplex in Round Two of the Carbusters Pro Dirt Series and in the process edged closer to the overall feature wins record at the venue, now just one win behind.

Now with thirty six feature wins to his name, Blake is just one win behind Speedcar superstar Scott Glazebrook and judging by the speed he showed tonight, is a real threat to take that lead and also make an impression in the overall Carbusters Pro Dirt Series.

Blake however did it the hard way tonight, slated to start from position seven in the feature while the front row was shared by Ryan Halliday and Paul Stubber, Halliday getting the best of the start.

Halliday was chased hard by Jay Cardy, with Blake slotting into third and Paul Stubber moving into fourth after disposing of rival Marc Giancola.
Warren Oldfield suddenly raced onto the scene, using the lowline and following Giancola through as they each moved past Stubber and Cardy. The latter two continued their battle, eventually coming together coming out of turn two and resulting in Cardy spinning down the back straight and bringing out the yellow lights.

The restart would see Halliday lead away Blake and Giancola, the top five then spreading out for the next few laps: Halliday leading Blake, Giancola, Oldfield and Stubber.

As the laps wound down in the twenty five lap feature race, Blake began to close the gap on Halliday while behind them, Oldfield was doing the same to Giancola.

With lapped traffic coming into play Blake went low in turn two on lap thirteen and grabbed the lead from Halliday, while Oldfield passed Giancola for third the same way about three seconds later.

Now it was Blake’s turn to pull away from Halliday as Oldfield and Giancola found themselves buried in heavy lapped traffic as they continued their battle.

Oldfield was able to get himself clearly into third but on lap twenty he slowed very quickly and headed infield, seeing Blake now leading Halliday, Giancola, Stubber and Michael Holmes with five laps to go .

Try as he might, Halliday was unable to close the gap and Blake went on to claim his thirty sixth career victory at the venue, defeating Halliday, Giancola, Holmes and Stubber. Veronica McCann did a great job to come home in sixth place while Cardy, Freddy Kinsella, Jason Bond and Nathan Callaghan. 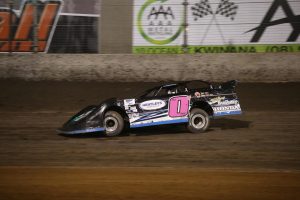 Earlier in the night Paul Stubber won the opening group qualifying and set a new record while the opening heat went to Jay Cardy in what was also looking like a record time until the yellow lights came out for a stoppage. The second group of qualifying saw Ryan Halliday take the win and in the process reset the one lap qualifying mark again. Halliday then broke the eight lap record as he claimed the heat win, while David Nylander, Joe Chalmers and Cody Avins all came to grief in the preliminaries, Avins in particular seeing his car disappear in plumes of white smoke as he finished qualifying.

There is not long to wait for the action to begin again, with the third round of the Carbusters Pro Dirt Series getting underway next weekend, Saturday the 2nd of November for Round Four, so stay tuned this week for all those details!