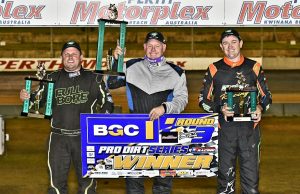 Perennial Late Model competitor ‘The O Show’ Brad Blake has not only tonight turned back the clocks once again and grabbed the feature win in Round Two of the BGC Pro Dirt Series, but in the process has equalled a long standing record as the winningest driver at the Perth Motorplex.

Blake came into the night with thirty six career victories at the venue, needing just one more to equal that set by Scott Glazebrook. Qualifying from position four in the feature put him in good stead, but starting behind the front row of Warren Oldfield and Paul Stubber, both themselves multiple feature winners at the Motorplex, may have cast some shadows of doubt as to whether tonight would be the night.

As the feature race went green, Warren Oldfield immediately shot to the lead with David Nylander slotting into second, but it was all for nought as Joe Chalmers spun in the middle of the field, Jason Bond, Jamie Moon and Nathan Richards all stopping to avoid him and bringing the yellow lights on.

The second attempt at a start saw Oldfield do the same, again pursued by Nylander with Blake and Stubber now also right in the mix.
Blake was then able to negotiate his way past Nylander and set out after Oldfield, the two pulling away from the rest of the field.
Warren ran the low line, Blake the highline, lap after lap, eventually the duo making their way into lapped traffic where things really got interesting.

As Stubber got by Nylander for third, Oldfield and Blake were ducking and diving their way through traffic and remarkably came out nose to tail and in clear air once again with eleven laps complete.
The yellows would come on shortly after when Jason Bond spun in turn three, seeing the field bunch up again for a restart.

Oldfield took the most of an opportunity, quickly clearing away while Stubber and Blake picked up their battle for supremacy, Blake getting the better of him and setting out again after Oldfield.
Blake would close the gap once more and again Oldfield and Blake would battle, Blake hunting for that record, while Oldfield was looking for his own piece of history; to make it ten seasons in a row that he claimed a feature win at the Motorplex.

As Stubber slowed and pulled infield, Blake finally made the move past Oldfield to grab the lead.
Blake began to pull away from Oldfield, but the gap was again reduced when a number of cars came together, Laura Byrnes left facing the wrong way on the main straight and the yellows flashing.
Blake would lead the field away, with Oldfield, Nylander and Brent Vosbergen right behind him.

‘The O Show’ went high through turn one with seven to go and Oldfield stuck the nose underneath but Blake powered right back around the outside. Oldfield didn’t give up though, going underneath him time and time again, desperately trying to make the move stick.

Behind them, Nylander got the better of Vosbergen, then Kodee Brown rode the highline to grab fourth and began looking for a way around Nylander.

With two to go Oldfield again drew alongside Blake, but once again the move didn’t stick, Blake going on to grab another important victory in his already very impressive career.

Oldfield was second across the line followed by former Australian Champion Kodee Brown who passed Nylander in the dying stages to record a fine podium finish. Nylander held on for fourth in what was one of the best performances of his career while Jay Cardy also drove a smart race, moving forward to round out the top five.

There is now a fortnight break for the Late Models before they again return to the high banks of the Perth Motorplex for the King of Kwinana event, which will double as Round Three of the BGC Pro Dirt Series. 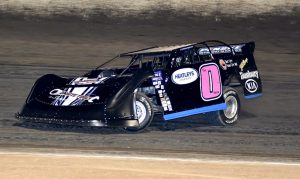