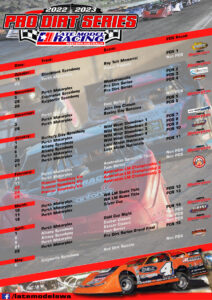 The 2022/23 Late Model Racing WA season is quite simply, going to be huge.
With a good mix of Pro Dirt and non-points shows, plenty of prizes and pride on the line and no less than six tracks on the schedule, there is a little something for everyone in this season’s calendar.
The 21st annual running of the season long Pro Dirt Series will kick off once again at the Allwest Plant Hire – Ellenbrook Speedway in the northern suburbs of Perth on the 15th of October. This event will also double as the Ray Tulk Memorial, the fifteenth time the event will be run, and all the stars and their cars are expected to be there, every single one ready to draw first blood and set the tone for what is sure to be a huge season.
A week later will be the first event of the Perth Motorplex season, the now annual Powerpalooza show, while the second round of the Pro Dirt Series will be held at the same venue two weeks later: the Westernapolis on November 5.
For the first time in over a decade, the Pro Dirt Series returns to the confines of the picturesque Esperance Speedway in our state’s south, with the first night of a double header weekend on Friday the 25th of November.
Teams will then head up the highway to Kalgoorlie International Speedway the very next night, the venue also returning to the official Pro Dirt Series schedule for the first time since Kye Blight recorded his maiden Pro Dirt Series feature race win there some seven years ago.
Two more big Pro Dirt rounds will be held at the Motorplex to farewell 2022, with the John Day Classic on the 3rd of December marking the fifth round and the Boxing Day Bonanza on December 26 the sixth round.
The New Year kicks off with a bang with a New Years Day show at the Bunbury Speedway, marking not just the seventh round of the Pro Dirt Series, but also the first night of the four-night Wild West Showdown.
This will be followed up the next night with the second round at the Perth Motorplex before teams hit the road again and travel down to Albany Speedway Club for a two-night showdown on January 6th and 7th, also marking the final two nights of the Wild West Showdown.
After a short break there will be another two-night show, this time back at the Perth Motorplex for the seventh annual Late Model Nationals.
February will be a quieter one in WA, allowing competitors to regroup after a big January, and a non-points show at the Motorplex on the 11th of February will also lessen the stress on competitors choosing to travel east for the National Title.
March certainly makes up for it with heaps of action including the two night WA Title at the Motorplex on the 10th and 11th of March, followed by the Silver Cup event (doubling as the thirteen round of the Pro Dirt Series) on the 18th of March.
April will see the Gold Cup event at the Motorplex on April Fool’s Day (marking the second last Pri Dirt Series round for the season), before teams head down the highway once again for the Easter Classic, which was such a hit at Albany Speedway Club last season.
The Pro Dirt Series will officially come to a close on the 22nd of April, while one more show will round out the 2022/23 calendar, with Kalgoorlie International Speedway again hosting the Red Dirt Rumble event, to be held on the 6th of May.
As if this wasn’t enough, there are also plenty of dates dotted throughout the season for Late Models to contest, including the Fast Racing Series shows at the Perth Motorplex, while we still have a number of Winter shows to get run and won before we head to Ellenbrook for our season opener in October.
Stay tuned as in the coming weeks we present even more content than ever, with driver interviews and videos, sponsor reveals and more!
In the meantime, start planning your season to make sure you don’t miss a single night of LMRWA action!
Release by DTN Media.
#prodirtseries #latemodelracing #lmrwa #latemodels #Series21 #perthmotorplex #ellenbrookspeedway #albanyspeedway #esperancespeedway #KalgoorlieSpeedway #bunburyspeedway