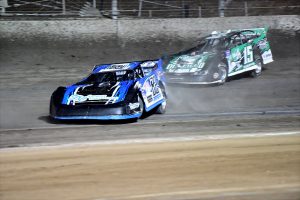 The 2020/21 BGC Pro Dirt Late Model Series just keeps getting better and this weekend’s Boxing Night show is proof of that, with the biggest field of the season nominated for what will be Round Five of the Series.

A good field of twenty five cars have thrown their hats in the ring for the weekend, with a number of drivers returning to action after missing some shows, a couple of number changes and even some drivers returning that haven’t raced this season!

‘The Black Knight’ Ryan Halliday has now won the last two feature races on the trot and would love to claim a third this Saturday night. Interestingly, if Halliday is able to claim the win, he will equal Warren Oldfield in overall Late Model feature wins at the Perth Motorplex and in the process, become equal third all time on the Late Model winners list at the venue.

Oldfield too is looking for his second win of the season and after falling short at the last show is still searching for that Motorplex victory that will give him a ten season winning streak at the venue. He will be trying his hardest to not only achieve that, but also build upon his series points, the standings in which he is currently tied for the lead with Brad Blake.

‘The O Show’ is another serious contender this Saturday night and he too will be looking to get one up on Oldfield as they fight for the lead in the standings. Ken Macpherson, Jay Cardy and Veronica McCann round out the top five so far in that same list and all the aforementioned drivers will be hoping to bank another pile of points.

Matt Amato grabbed his first ever podium finish at the last show and sits sixth overall, so he will be keen to build on that, while seventh placed Michael Holmes will this weekend strap back into his familiar #91 machine after his long awaited 2020 BWRC arrived. Jason Oldfield is another who has renumbered to #84 after driving the #51 at the last show.

Paul Stubber, Joe Chalmers and Brent Vosbergen round out the top ten in the series standings and will look to move further up from there while others including the impressive David Nylander, Jason Bond, Jamie Moon and Laura Byrnes are outside that bubble and will be doing all they can to make their presence felt.

Ryan Ludlow is hitting the track for the first time this season, driving the #37 machine last week driven by Brendan McKeagg while Craig Greentree is making his return after several seasons out of the seat aboard his well-presented #33. They will be joined by Australian Champion Kye Blight, Willy Powell, Daniel Ameduri and Darren Ahearn, all of whom missed the last show and will be keen for a good run.

Action will be on track from 4.30pm, with Late Models competing in four heats (two per driver) prior to the all important thirty lap feature. Until then though, stay safe over Christmas and we will see you safe and well at the Motorplex on Saturday!