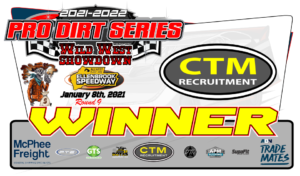 This weekend marks the halfway point of the Wild West Showdown and the action is sure heating up as we reach the halfway point, with rivalries building right throughout the field and of course a points battle that is sure to come down to the wire.
Saturday afternoons event at the @Allwest Plant Hire – Ellenbrook Speedway will also be Round Nine of the Pro Dirt Series, proudly presented by CTM Recruitment Pty Ltd and with nineteen nominations, we are in for an old-fashioned shootout to see who reigns supreme!
Coming into the show Brad Blake is the Showdown points leader and having won the last feature race at Ellenbrook Speedway, he is certainly looking good to grab another points haul and maintain his lead. He would love nothing better than to grab another Pro Dirt win and show his rivals who the boss is!
Jay Cardy was second at that same Ellenbrook show and a consistent season so far also sees him second in the Wild West Showdown points and third overall in the Pro Dirt Series standings. Known as ‘The Educator’ he will be looking to give his fellow competitor a lesson and walk away with the win and maybe even move his way further up the standings.
After missing the two Wild West shows last round, Jason Oldfield has slipped down the overall Pro Dirt points rankings, but still maintains a top ten position. Racing once again at his home track, where he came home with a podium at the start of the season, Oldfield will be looking to defend his home turf and fight for the honour of Ellenbrook come Saturday nights feature race.
Brothers Warren and Jamie, along with Daniel ‘Nudge’ Ameduri (who is inside the top three of Wild West points) also call Ellenbrook home and will be fighting desperately to ensure that none of the visitors make their way onto the podium.
Another local in Peter Seaton has not contested a Pro Dirt Series round since the 13th of October, 2018, which was also held at Ellenbrook, so he will be keen to test his mettle once again and also work towards ensuring the locals dominate the event.
Brent Vosbergen and Kye Blight have been the in form drivers so far this year and with both in the field again this weekend will be hard to beat, while others including Michael Holmes, rookie Rod Musarra and Smokin’ Joe Chalmers have all had solid results in recent events and will be looking to leave their mark in this weekends battle.
With CTM Recruitment again getting behind this weekends event (with team driver Richard Wells also in the field) it is sure to be another great event….who will emerge victorious from this Showdown?
The 2021/22 Pro Dirt Series proudly bought to you by ABN Trademates, CTM Recruitment, Mcphee Transport, Global Testing Services, the PTE Group, SupaFit Seat Covers, APM Roofing, Boyes EQS and Dirt Track Nutters.
Release by DTN Media.
Pics Courtesy Peter Roebuck.
Official Nominations – 19
0 Brad Blake
A1 Kye Blight
4 Brent Vosbergen
04 Greg Horan
11 Jason Oldfield
15 Warren Oldfield
20 Graham Murray
21 Rod Musarra
22 Richard Wells
23 Joe Chalmers
50 Veronica McCann
51 Jamie Oldfield
52 Jay Cardy
55 Peter Mewett
65 Peter Seaton
80 Damian Hudson
82 Matt Amato
83 Daniel Ameduri
91 Michael Holmes
#prodirtseries #lmrwa #ellenbrookspeedway #latemodels #latemodelracingwa #wildwestshowdown
Posted in news
Scroll To Top