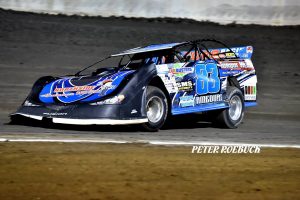 Round Two of the Sims Metal Management Late Model Pro Dirt Series kicks off this weekend, coinciding with the opening round of the Perth Motoplex season, known as Powerpalooza, and with twenty one cars nominated, Late Models once again lead the way!

High in numbers and high in quality means we are sure to have a sensational show on Saturday night, with any number of drivers capable of taking out the win.

Opening round winner Jamie Oldfield has nominated for the show and would love to go two from two in season 2018/19, while Brad Blake and Ken Macpherson, who rounded out the opening night podium, are both also nominated and are well placed to keep their strong opening round form going.

Brent Vosbergen was strong in the opening round feature, while Paul Stubber and Kye Blight were two of the big names who didn’t quite have the finishes they desired and are desperate for a measure of revenge.

Others like Michael Holmes, ‘Red Hot’ Veronica McCann, Jay Cardy and Marc Giancola will also be right on the pace and a real chance of being on the podium come the end of the feature race on Saturday night.

‘The Black Knight’ Ryan Halliday makes his first appearance for the season and after an outstanding 2017/18 with multiple feature wins, will be hopeful of getting his campaign off on the right foot and get the Longhorn back on the top step of the podium.

Freddy Kinsella is slated to make his rookie appearance in the Sims Metal Management Pro Dirt Series, while names like Jamie Moon, Chris Pavlovich, Willy Powell and Jason Bond will also make their first appearances for season 2018/19. Add in a whole host of other names and Late Models are set to pick up right where they left off at the end of the last show, with fans on the edge of their seats.

It is going to be yet another big show, with qualifying, two heats and then a big feature event set to bring in the Perth Motorplex season with a bang!

Pictures: Daniel Ameduri and Joe Chalmers will be looking for a big result on Saturday night. Pics Courtesy Peter Roebuck. 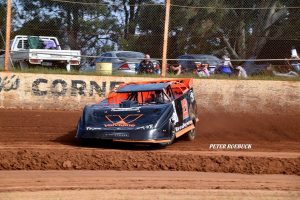