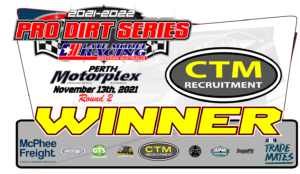 Twenty-four Late Models have nominated to get back in the ring and take another swing at the Pro Dirt Series this weekend, with the second round proudly presented by CTM Recruitment Pty Ltd this Saturday night at the Perth Motorplex!
The event will also double as the King of Kwinana show, which will be the sixteenth time it has been held and we are guaranteed a new winner this year with last years winner Ryan Halliday (Ryan Halliday Racing) not in the field!
The opening round was a cracker, with Brent Vosbergen (Team Vosbergen Racing – TVR) emerging as the opening round winner and that is something he will be keen to achieve once again come feature time this weekend.
However, there will be another twenty-three drivers keen to avoid that happening! 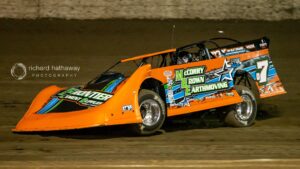 Paul Stubber and Brad Blake rounded out the podium at the opening show and would love to add another notch to their feature race belts this weekend, while Kodee Brown (McCorry Brown Racing Team) and Matt Nylander (Nylander Motorsport) were both hard luck stories on the opening night, Brown having led much of the feature race before heading infield and Nylander having a great run before ultimately finishing fourth. 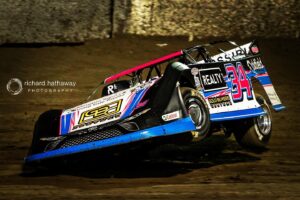 The battle between these five aforementioned drivers is sure to be worth the price of admission alone, but if you add the mouth-watering prospects of the three Oldfield brothers Warren, Jason and Jamie (Oldfield Racing), David Nylander (Nylander Motorsport) who this weekend will be running with a bigger and better motor, and the on-fire Jay Cardy (Cardy Racing Components) (figuratively and literally at the last show!) we are sure to have a battle for the ages.
Veronica McCann (Veronica McCann – Red Hot Racing), Luke Halliday and Daniel Ameduri (Ameduri Motorsports) are desperate to get a podium finish while rookies including Graham Murray and Rod Musarra (Rod Musarra Racing #12) will also be looking to continue their development against the big guns of the division.
Add in Cody Avins (Avins Racing), Matt Goodlad (Daytona Racing), the Team Green Racing team of Freddy Kinsella and Craig Greentree and CTM Recruitment Racing‘s own Richard Wells who are all nominated to make their first starts of the Pro Dirt Series for 2021/22 this weekend and who knows what surprises these drivers will be able to pull off across Saturday night!
See you trackside this Saturday night at the Perth Motorplex for the second round of the Pro Dirt Series, proudly presented by CTM Recruitment Pty Ltd, and make sure you come visit us in the pits, not just to see all the stars and their cars, but also because CTM Hire will have a heap of giveaways including gift bags that have shirts, puzzles, keyrings and drink bottles, plus a heap of posters, drink bottles, stickers and stubby holders!
The 2021/22 Pro Dirt Series proudly bought to you by ABN Trade Mates, CTM Recruitment Pty Ltd, Mcphee Transport, Global Testing Services, the PTE Group, SupaFit Seat Covers, APM Roofing and Gutters, Boyes Eqs and Dirt Track Nutters.
Release by DTN Media.
Pics Courtesy Richard Hathaway Photography.
Official Nominations – 24
0 Brad Blake
4 Brent Vosbergen
07 Kodee Brown
10 Cody Avins
11 Jason Oldfield
15 Warren Oldfield
18 Matt Goodlad
20 Graham Murray
21 Rod Musarra
22 Richard Wells
31 Paul Stubber
33 Craig Greentree
34 Matt Nylander
44 Laura Byrnes
50 Veronica McCann
51 Jamie Oldfield
52 Jay Cardy
54 David Nylander
71 Jamie Moon
82 Matthew Amato
83 Daniel Ameduri
94 Luke Halliday
318 Freddy Kinsella
Late Models King of Kwinana History
2020/21 – Ryan Halliday
2019/20 – Brent Vosbergen
2018/19 – Paul Stubber
2017/18 – Ryan Halliday
2016/17 – Not Held
2015/16 – Not Held
2014/15 – Not Held
2013/14 – Craig Vosbergen
2012/13 – Not Held
2011/12 – Not Held
2010/11 – Brad Ludlow
2009/10 – Not Held
2008/09 – Craig Vosbergen
2007/08 – Craig Vosbergen
2006/07 – Ryan Halliday (feature), Brad Blake (points)
2005/06 – Ben Ludlow
2004/05 – Brad Blake
2003/04 – Ben Ludlow
2002/03 – Brad Blake
2001/02 – Craig Vosbergen
2000/01 – Ryan Halliday
#prodirtseries #lmrwa #perthmotorplex #latemodels #latemodelracingwa #ctm #ctmrecruitment
Posted in news
Scroll To Top