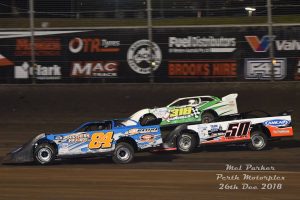 For the first time since early January the thunder and lightning Late Models will return to the high banks of the Perth Motorplex for what will be Round Eight of the Sims Metal Management Late Model Pro Dirt Series.

In the time that we have been away, drivers have completed the Di Candilo Steel City USA vs WA Invasion Tour, then there was a break in local racing to allow for some of our local drivers to head over East to compete in the National Title, which they did admirably.

Now back at home, we have a great eighteen car field nominated for this Saturday nights show, including the newly crowned Australian Champion and the man who came home Australia #3!

Headlining this Saturday nights show would have to be the new Australia #1, Paul Stubber, A big weekend of racing, including being sent to the rear in the final event before racing his way back to the front of the field means Stubber is on a career high and will come back home determined to show everyone exactly why he is currently the best in the Nation.

Jay Cardy had a career best performance to come home third in the same race, and he too will return home full of confid 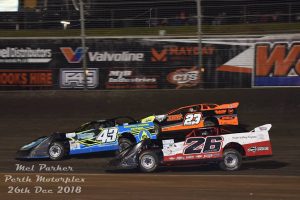 ence. Having recorded three podiums here at home so far this season without grabbing win is getting frustrating for the team and they will be out to grab that elusive victory this weekend and also improve on their current second place in the overall standings.

Coming into tonight’s show, Michael Holmes is the current points leader in the Perth Motorplex Track Championship and the Sims Metal Management Pro Dirt Series and with one win and three podiums (all in a row) he has got a taste of being at the front and he isn’t willing to give it up easy.

Currently sitting in second place of the Motorplex Championship, Ryan Halliday became the first multiple winner of the season at the end of last year and has consistently been towards the front of the field ever since, mechanical issues costing him a potential third win. He has a number of feature wins to his name and would love to add another one to record books on Saturday.

Marc Giancola is third in the Sims Metal Series and fourth after seven rounds in the Motorplex Championship, having been at the front of the field most of the season and will look to duplicate that once more in Saturday’s action packed event.

Other names in with a big chance of winning include ‘The O Show’ Brad Blake and Brent Vosbergen who looked very quick at practice on Wednesday night as he got prepared to hit the track once again.

Add in names like Veronica McCann, Ken Macpherson, Jayden Meckenstock and Jai Mazzini who are all looking to record their maiden feature wins and really stamp their authority on what is one of, if not the, most competitive and exciting divisions of speedway racing.

Engine Starts and qualifying for other divisions begin around 4.30pm this Saturday evening, with Late Models scheduled to hit the track for the first of four heats (two per driver) at about 6.40pm. These heats will be held over eight laps, prior to a thirty lap feature event.

Pictures: The Late Models are excited to be hitting the track at the Perth Motorplex once again! Pics Courtesy Mel Parker.