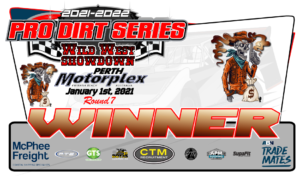 The excitement has been building for weeks and the time is finally here!
No, we aren’t talking about farewelling 2021 or welcoming in the New Year, we are talking about the Wild West Showdown which finally gets underway this weekend with a massive double header!
The series will kick off this Saturday night at the Perth Motorplex (and then again with round two the following night) in what is the first of the five nights of racing and with twenty-eight nominations received for the first night, it is sure to be an epic battle to claim opening round honours.
As if this wasn’t enough, each of the Wild West shows will also be Pro Dirt rounds, meaning drivers have plenty to play for each and
every night.
Focusing on this Saturday nights field and with such quality right throughout the nominations, picking a winner is certainly going to be tough.
Brent Vosbergen (Team Vosbergen Racing – TVR) has been dangerous all season and with six Pro Dirt rounds in the books so far this season, he has won 50% of them and never finished off the podium such has been his form. Can he continue those runs, grab win #4 and perhaps even the overall series win?
He will of course face some stiff competition, with Kye Blight (Kye Blight Racing), who has claimed two Pro Dirt features this season and Matt Goodlad (Daytona Racing), who claimed the other feature win, both also in the field and desperate to add to their tallies. 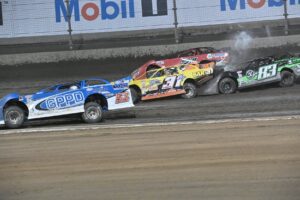 Warren Oldfield (Oldfield Racing), Paul Stubber and Kodee Brown (McCorry Brown Racing Team) are three of the more fancied names this season who haven’t yet broken through for the feature win they so desperately crave, so they will be keen to rectify that this weekend while others like Jamie Oldfield (Oldfield Racing), Jay Cardy (Cardy Racing Components) and Michael Holmes (Michael Holmes Racing) also know what it takes to win races and with a little bit of luck going their way, could also end up on the top step come the end of the thirty lap feature event.
Daniel Ameduri (Ameduri Motorsports) was fast at the last show and qualified on the front row before ultimately finishing on the infield, something he will want to bounce back from on Saturday night while in a contrasting fortune, Joe Chalmers (Team BCM Motorsport:) raced his way to an awesome second place at the last show and would love to back that up with another good result. 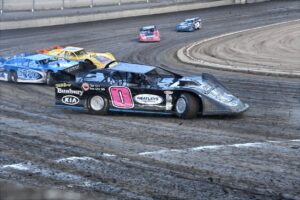 Names like Brad Blake, Veronica McCann (Veronica McCann – Red Hot Racing) and Cody Avins (Avins Racing) didn’t quite have the run they were hoping for at the same Boxing Night show so will be working hard in the shed to get their cars prepared once again to the highest possible standard for their assault on the series this weekend.
It is also great to see a number of drivers who haven’t been part of the program for a while making a return this weekend. Jai Mazzini hasn’t done a Pro Dirt round since March 2020, but recently had a go in the FAST show at the Motorplex and finished on the podium, so he will be looking to build on that, while we also welcome back David Boyes (Boyes Motorsport) for the first time this season, again making the trek down from Kalgoorlie.
It is also good to see names like Laura Byrnes (Red Shamrock Racing), Warren Minshull, Greg Horan and Graham Murray back in the field after missing the last few shows, and with a bit of luck each of these drivers could well record their best finishes yet.
The stage is set, the drivers are ready…. so stay safe over the New Year because New Year’s Day (and the day after!), the Perth Motorplex) is the place to be as the Wild West Showdown begins!
The 2021/22 Pro Dirt Series proudly bought to you by ABN Trade Mates, CTM Recruitment Pty Ltd, Mcphee Transport, Global Testing Services, the PTE Group, SupaFit Seat Covers, APM Roofing and Gutters, Boyes Eqs and Dirt Track Nutters.
Release by DTN Media.
Pics Courtesy Peter Roebuck.
Official Nominations – 28
0 Brad Blake
A1 Kye Blight
4 Brent Vosbergen
04 Greg Horan
07 Kodee Brown
10 Cody Avins
15 Warren Oldfield
18 Matt Goodlad
20 Graham Murray
21 Rod Musarra
22 Richard Wells
23 Joe Chalmers
31 Paul Stubber
38 Jai Mazzini
44 Laura Byrnes
47 Warren Minshull
50 Veronica McCann
51 Jamie Oldfield
52 Jay Cardy
54 David Nylander
55 Peter Mewett
71 Jamie Moon
74 Nathan Richards
83 Daniel Ameduri
90 David Boyes
91 Michael Holmes
92 Brad Ludlow
318 Freddy Kinsella
#prodirtseries #lmrwa #perthmotorplex #latemodels #latemodelracingwa #wildwestshowdown
Posted in news
Scroll To Top