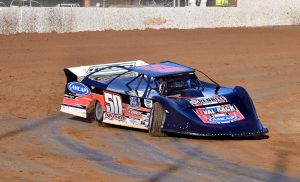 It has been a thrilling few weeks of racing for the Late Models in Western Australia and they are set to pick up the battle once again this Saturday night with twenty cars nominated for Round Five of the Carbusters Pro Dirt Series at the Perth Motorplex!

The event will double as the annual King of Kwinana event, one that has been run on twelve previous occasions. Of those events, only six drivers have claimed the win, Craig Vosbergen leading the pack with four victories. Ryan Halliday is next best and as one of only three drivers in this weekends field that have won this event previously, is well placed to put himself equal with Vosbergen.

Brad Blake and Ben Ludlow have each won the event twice while Brad Ludlow and Paul Stubber each have single victories, Blake and Stubber also nominated for this weekend and right on the pace so far this season so they too can lay a legitimate claim to the feature race come Saturday night.

Of course, the on track action has been second to none for the Late Models this season, with four different winners from the four rounds so far: Brent Vosbergen, Brad Blake, Warren Oldfield and most recently Marc Giancola filling the top spots. All four are back in the field this weekend, Vosbergen in particular after missing a few rounds with engine dramas will be keen to emulate his father’s efforts in the King of Kwinana event, while Giancola will be looking to go back to back and Oldfield to continue his solid season which sees him currently second overall in the series points.

Michael Holmes is the man atop the series points tree at this stage, having scored two podium finishes in feature races to go with his two feature wins so far in 2019/20. He too has been right on the pace but hasn’t quite been able to round it out with a feature win, so will be looking to break through this Saturday night.

‘The Flying Pom’ Freddy Kinsella comes off a career best finish last weekend and is certainly looking to be a threat to some of the other front runners while in direct contrast ‘Red Hot Roni’ Veronica McCann is desperately seeking some better luck after a rough run at the last show.

Daniel Ameduri has also had an up and down season, recording some strong results including a great fourth place at the last Motorplex show before finding himself in the wall at the last event so he will be looking to finish well, while Jay Cardy is in the same boat, not recording the results that he would have liked so far. Both have shown they have what it takes to be up the front and will be hopeful of reclaiming that form on Saturday night.

Lee Redmond, Matt Amato and Cody Avins have been battling it out for Rookie of the Year honours already this season and all have made significant improvements in the early stages of their Late Model racing careers. They each put in solid performances at their last shows respectively and are looking to back that up this weekend with another good result. 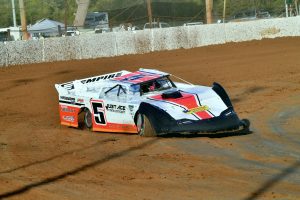 At the opposite end of the scale, long time competitors Jason Oldfield and Simon McNab make their returns to the field this Saturday night. Oldfield has so far only raced the opening show of the season where he came home ninth while McNab missed the last show after last minute mechanical dramas and both would love to get their names up in lights come feature race time on Saturday.

Jayden Meckenstock has been battling mechanical gremlins all season but is hopeful he has them sorted ahead of Saturdays show while David Nylander is also back in the field after having engine dramas at his opening show of the season. Willy Powell and Jason Bond round out the field and after a solid run already this season, each will be looking to keep that momentum going.

It will be a limited night of racing for the Late Models this weekend, with each driver competing in one heat race and a session of qualifying immediately prior to their heat, as they did in the Powerpalooza event to open the Motorplex season. The night will then be concluded with the thirty lap feature race to determine who is the King of Kwinana for 2019/20 and the winner of Round Five of the Carbusters Pro Dirt Series!

Pics: Lee Redmond and Veronica McCann will be looking for good runs this Saturday night.