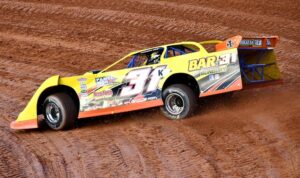 Albany Speedway Club has always been a happy hunting ground for Kye Blight (Kye Blight Racing) and tonight was no different as he dominated the proceedings to go through the night undefeated in what was the fifth round of the 2021/22 Pro Dirt Series.
Blight claimed two heat wins earlier in the night, which set him up for the pole position start in the nights feature race, just the second driver to claim the Dirt Track Nutters sponsored award so far this season after Brent Vosbergen (Team Vosbergen Racing – TVR) started off pole in all the previous four rounds feature races.
Vosbergen would start alongside Blight on the front row after he claimed a heat race win, while the second row was filled out by Jason Oldfield (Oldfield Racing), who also won a heat race, and Michael Holmes (Michael Holmes Racing).
On the first attempt at a start in the feature race, Vosbergen grabbed the initial lead from Blight but back in the field Freddy Kinsella (Team Green Racing) and Jay Cardy (Cardy Racing Components) came together down the back straight, Veronica McCann (Veronica McCann – Red Hot Racing) left with nowhere to go and climbing over the top of the duo, getting some significant airtime, but all were able to restart.
The second attempt saw Vosbergen again grab the lead and despite some touching amongst cars further back in the field, this time we competed a lap and the race began to settle into a rhythm.
Blight snuck up on Vosbergen and on the fourth circulation he pulled level, only to have Vosbergen again pull away. Shortly after the yellow lights came on for Rod Musarra (Rod Musarra Racing #12) who had come to a stop with a flat tyre.
The restart saw Jason Oldfield dive through and steal second from Blight, with Blight trying to fight back but Oldfield able to hold on.
Vosbergen, Oldfield and Blight were in a three way high speed pursuit over the next few laps, with Blight eventually able to pass Oldfield for second once again on lap eight.
It didn’t take long for Blight to close the lap on Vosbergen, going low in turn three to make the pass and leading the ninth circulation.
From here Blight began to stretch his legs, encountering his first lapped traffic on lap twelve which certainly didn’t slow him.
Behind him, Oldfield was piling the pressure on Brent, lap after lap he would look for a way through and even made a move on lap fourteen but it wouldn’t pay off.
The duo even found themselves fast approaching a lapped car, so they slowed, filed neatly around it, then resumed the battle once more!
Back up front Blight was weaving his way through lapped traffic, his expertise such that no matter where he put his car on the track, it simply worked. He even watched two lapped cars in front of him make contact and change direction and he simply backed off, worked out a new plan and approached them from a new angle and ended up flying past them, all in a matter of seconds.
With ten laps to go Blight, was a full half track ahead of second placed Vosbergen and by lap twenty six he was lapping fourth placed Michael Holmes.
In the dying stages he would close on the back of Vosbergen and Oldfield who would continue to fight it out, the duo side by side in the final laps but Vosbergen ultimately able to hold on, Blight officially defeating Vosbergen and Oldfield as the only three cars on the lead lap. 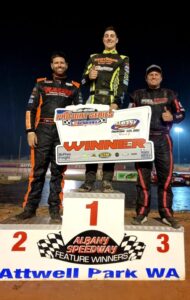