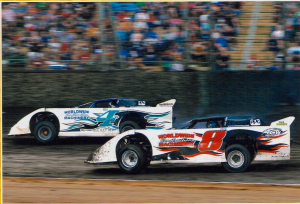 It has been a tough time for many people recently with the passing of Big Bad Bert Vosbergen. An excellent tribute to Bert Vosbergen by Brian Chalmers is posted below, and the LMRWA are going to also be honouring Bert during this weekends Roof off Roar Topless Race at the Perth Motorplex.
LMRWA will conduct a small tribute to Bert during the 4 wide salute on Saturday. Bert’s grandson Brent, has decaled his car in Bert’s famous black Freedom Furniture livery for this week as tribute to his pop, and will form up behind the pace car prior to the feature race. The remaining field will form up as normal in a four wide, but leave a space vacant on the front row in what is known as the missing man salute.
“ A tribute to Big Bad Bert Vosbergen”
Once in a lifetime there’s that one person everyone talks about in life, whether it’s good or bad that person has some kind of reflection in your life that you’ll never forget.
This week we celebrated the life of a person exactly like that, to the veterans he was “The Flying Dutchmen” to his heroes he was “Big Bad Bert” to his family & friends he was simply Bert Vosbergen.
A career spanning over 50 years on the dirt, Bert wasn’t a Friday night dirt racer, he was a weekly entertainment machine, through the powers of local media, TV, Print & Radio he would inspire the crowds to love him, urge the competitors to hate him, but either way they were entertained & that’s what Friday night is Speedway night meant to the thousands who attended each & every year at Claremont Speedway on the famous hallowed Showgrounds.
Bert turned the world of Grand National Sedans racing in Western Australia on its head, one day he built a car that would revolutionise the sport, if a competitor turned up one week thinking he’s done enough to catch the 4, Bert would come out the next & be twice as quick, twice as better, twice as Badass, what ever a driver tried, Bert would match & then some.
The infamous Freedom Furniture Black Grand National was a powerhouses in Australian sedan racing, if you cast your mind back & think of the 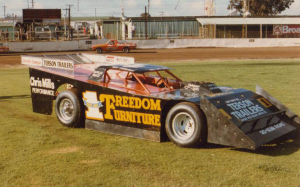 technology available in the 80s & 90s it’s nothing like today, so for Bert to master a machine of that era to be that dominant was a credit to Bert, his crew & the people that helped & supported him week in & week out..
Some of the many highlights back in those days were the write ups in the Sunday Times, Sunday Independent, Daily News & the Claremont Speedway Program, or 6PR & CH7, Con Migro & Wade Aunger built a powerhouse marketing machine, with out even trying, he was like that movie “Number 5 is Alive” the more input you fed him, the bigger in stature Bert would become. It was “Big Bad Bert” Vs the USA, he would put bums on seats, that would follow Bert through out his whole career, you only have to look at his service this week at Burswood drawing close to 1000 people & he was still the Center of the show making people laugh, that’s just how Bert was. 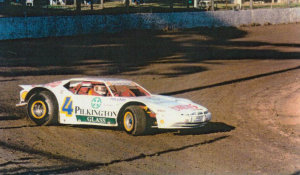 He was the first guy to race more than one division on a night, sometimes back to back, his crew would have the Grand National ready, he would go out either win or cause controversy, park on the infield and jump into the #5 Super Sedan, there was no stopping him, just look at his persistence with the Pantera in later years.
From Grand Nationals Bert would join the steady flow back into Super Saloons which turned back into Super Sedans, it’s just the way the sport went in Australia, but what ever Bert did, he did it 100mph & 100% with no shortcuts, no regrets & all the passion any one man could master.
In the 1990s Bert would House the largest Super Sedan Team in Australia & probably still to this day, 4 cars, two transporters, one tool trailer, he brought to the sport corporate names such as Channel 7, McDonald’s, Shell Helix, Pilkington Glass, Valvoline, 96fm & MMM the list goes on, they were drawn to him, no corporate contracts, no board room meetings, just a good old honest handshake & that’s how you learnt to love “Big Bad Bert”.
You’ve heard all the stories, read the posts, watched the videos the man called a spade a spade, told you how he felt, spoke his mind, but 5 minutes later it was like it never happened, coming from first hand experience, it was what drew you to the man & a way he attracted so many loyal friends.
Bert was a life changer In many ways, with out trying he would shape people’s lives around him, help them, guide them while all the time being your friend & mortal enemy at the same time, he was the one person that when you looked In the dictionary under white line fever, there was a picture of Bert, because of how he would be on either side of the fence, or with a helmet on, without a race suit Bert was Clark Kent, with a race suit on he became Superman.
Bert would step back into Late Models in the early 2000s when the speedway moved to its new home at the Perth Motorplex in many different cars, it was the attraction to race with his son Craig that drew him back to the wedge cars, but after a few years his passion for Super Sedans would get him back on the right hand side of the car.
Bert also housed some of the worlds greatest names in the Teams cars, like a very young world of outlaw sprintcar driver Shane Stewart, former caddy of Tiger Woods, Steve Williams, USA late model super star Steve Shaver, Ohio native Doug Drown, Texan Hot Shoe Ronny Adams & former Olympic Gold Medalist Neil “Mean Machine” Brooks. Bert just found a way to make it work, while drawing people in who wanted to be apart of what was going on, he would be a people magnet & it continued 24/7 & it never slowed down.
Late Model Racing Western Australia will this weekend hold its annual Roof Off Roar, Topless race; 40 fierce laps of brutal Late Model racing around the high banks of the Perth Motorplex, but in the back of every drivers minds at some point will be a smile for the #4 because that’s the way Bert would have wanted it, he doesn’t want anyone to be somber, he wants everyone to be loud & proud.
At the service this week the former freedom furniture black Grand National livery was presented on the side of Bert’s grandson Brent’s #4 TVR Rocket, it will enter the track this week with that extra drive from a man who never did things half assed, a man who never left anything behind, a man who we simply called “Big Bad Bert”
People that knew Bert would know his love, passion & bias view on his family, he adored his wife Jude, supported in every way his kids Craig & Kim & when it came to the grandkids, Brent, Brooke, Melissa, Carl & Lee, you then saw another side of love & locality you didn’t think he could top. He was a one eyed Vosbergen & family & friends meant everything to him.
This week at the track, take a minute to reflect, like Wade Aunger said “We do this backwards, we need to celebrate people while they are here now, not when they are gone”.
While sitting in the crowd this weekend anywhere in Oz, turn to the Person next to you & tell them about your story on Big Bad Bert, something about those Badass number 4s, while Enjoying the racing & reflecting on a story you will remember about the #4, also remember the people around you now, cause that’s how “Big Bad Bert” would have done it. 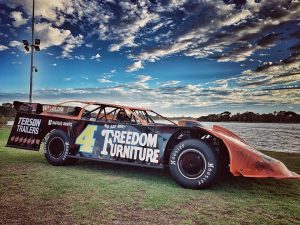