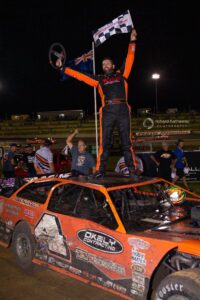 For the tenth time this season Brent Vosbergen (Team Vosbergen Racing – TVR) tonight made his way into victory lane at the Perth Motorplex, rewriting the record books and claiming both the Pro Dirt Series and Perth Motorplex Track Championship wins.
Despite how dominant the stats sound, Vosbergen certainly didn’t have it all his own way tonight, being one of the rare occasions that he didn’t even qualify onto the front row for the feature event.
The pole position honour went to Joe Chalmers (Team BCM Motorsport:) (who scored a win and a third place finish in his heats) while Paul Stubber joined him on the front row courtesy of a second and a fourth.
Chalmers raced into the immediate lead as the race went green, moving low on the track while Stubber ran high and shot by to grab the lead as they crossed the line the first time.
Vosbergen settled into third followed by Jay Cardy (Cardy Racing Components) who was determined to lock away third in the Championship Series, while further back was a stack of cars fighting for position.
Chalmers didn’t give up and continued to pursue Stubber, with Vosbergen also just loitering behind as the top three pulled away from the rest of the field.
Lapped traffic began to make its presence felt with ten laps complete, and Stubber found himself smashing the wall in turn one, seeing sparks fly and allowing Chalmers to maintain his low line and take the lead.
Stubber recovered and continued but would have a half lose in turn three the same lap, contact being made between him and Vosbergen, Stubber hitting the turn four wall and then slowing before eventually retiring infield.
Further back Warren Oldfield (Oldfield Racing) moved through past Stubber and Cardy in less than a lap to take over the third place running, but by this point he was half a lap behind Chalmers and Vosbergen. 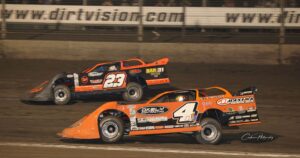 Lapped traffic began to hold Chalmers up, and on lap nineteen Vosbergen began to make his move, using the lowline to put the nose in front to complete lap nineteen.
He would dive past one lapped car but Chalmers went with him, the duo resuming the battle albeit with positions reversed.
Vosbergen remained low and Chalmers went high, with Chalmers going around the outside of Vosbergen on lap twenty two to take the lead once more.
With five to go Chalmers was still able to maintain his lead, picking off lapped cars one at a time, with Vosbergen stalking his every move.
Through the corners Vosbergen would go low and Chalmers high, and with two to go the two made contact, Vosbergen taking the lead back, the duo separated by 0.103 across the line with one lap to go.
Try as he might Chalmers could not close the gap again and Vosbergen went on to claim his tenth Motorplex feature win of the year, his eleventh feature win of the season across the board and in a time that was less than one second outside the thirty lap record at the Motorplex.
Chalmers was an impressive second place while third place went right to the line, with Warren Oldfield getting baulked in lapped traffic and allowing brother Jamie to race around and take the final spot on the podium. 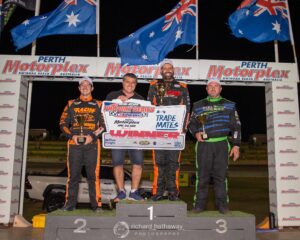