Easily one of Western Australians best young drivers in the Dirt Late Model ranks, Bunbury’s Kye Blight has settled himself down as one of the top runner’s week in week out. But after what was a horrid start to his 2016/17 Maxima Racing Oils Pro Dirt series, Blight and his Blight Racing Revelution Chassis have put themselves inside the top three in points at the halfway point of the season.

But after what could have been the fork in many people’s seasons, Blight has stayed confident in his package.

“As everyone that knows me would tell you, I like playing around with my race car. Usually that means we suck so badly early on in the year before we work out our notes and what works for us. I always knew we had a good package but it’s just piecing it all together.” Blight explained.

“I don’t get too concerned about running bad, until the big races come to town.” 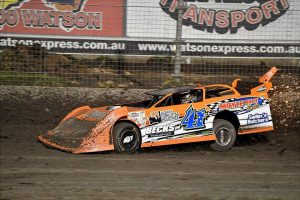 In Blights opening season of his Dirt Late Model career, when he was put toe to toe up against Steve Francis in a heat race at the final round of the 2015 Randos Cane Furniture USA Invasion Tour, Blight put up a performance for the ages holding off Francis for the entire distance taking the victory, as he recollects.

“I don’t think it sunk in, what we actually achieved that night. We ran really well and it kind of gave us a boost, but at the same time we knew it was one show and we were still very clueless on these cars and had a long way to go.”

Now in his third Dirt Late Model season and his second USA Invasion tour, Blight has now gained more experience and more laps of a Dirt Late Model, and after spending the past week working with Jason Moyle Racings import Devin Moran, Blight tells us that the Americans are just not here to fill in their off season and says that the young man from Dresden, Ohio is the one to keep your eyes on in the 2017 USA Invasion Tour

“Working with Devin these last few days has really opened my eyes as to how determined these Americans are to win. I like that. I like the fact they aren’t out here thinking it’s just easy and having a holiday. I’m so pumped up to get these engines fired and get started.”

“He’s also, smart and in some great equipment. I think the Aussies will certainly be winning races and giving it a good shake, but Devin may sneak over the line.”

During the Australian off-season, Blight was lucky enough to head over to America to gain the opportunity to work with some of Americans best dirt late model drivers in Tim McCreadie and Scott James. Over the period of time during his journey it was easy to see the experience he had gained.

“Because we worked on different cars with different people, there were so many different ideas on how to make cars fast, which usually all work. So I learnt that if you are willing to work your butt off, you can get anything to win races.”

Blight and Blight racing would like to thank his sponsors, Blights Auto Electrics, Albany Forklifts and Industries, Sadlers Butchers, Moyle Race Parts, Becks Transport and Speedway Sedan Digest. Along with his girlfriend Jaimie, Mum and Dad, Nan and Grandad and my brothers Cody and Jake who make his racing possible.

Watch Western Australia’s best take on the American Invaders at the 2017 USA Invasion Tour at the following rounds: