The opening round of the Supatlit Wild West Tour was conducted at the Perth Motorplex over Boxing Night and December 27 2012, and it was Steve Francis putting on a stellar driver to take out the first nights action.

Francis dominated the night winning both his heat races and he led every lap of the preliminary A-Main to remind the Western Australian public what he is capable of behind the wheel of a Dirt Late Model. 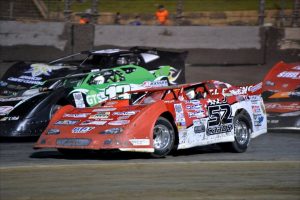 It wouldn’t be without a little drama for Francis, with smoking starting to come from the engine of the Ozmine Rocket with a handful of laps remaining. Jamie Oldfield would get the better of Devin Moran in the concluding laps to finish second with Moran third. Craig Vosbergen would finish in fourth ahead of the consistent Matt Goodlad, Warren Oldfield, Ben Nicastri, Koran Atkinson, Mark Matthews, Jeremy Hale, David Nylander, Matt Crimmins and Ben Ludlow who rounded out the finishers in his new car.

It was a new night but the same result for the second night of action at the Perth Motorplex on December 27 2012 with Ashland, Kentuckys Steve Francis putting in a fine performance to take out round one of the Supatilt Wild West Tour.

Francis dominated proceedings again just like he did the previous night during the preliminary part of the opening round. The Ozmine Rocket was on rails all night at the high banked Perth Motorplex with Francis winning the twenty five-lap A-Main comfortably over Jamie & Warren Oldfield.

A number of drivers failed to front up for night two after sustaining too much damage from the opening nights racing including Ben Nicastri from New South Wales. Brad Ludlow and his younger brother Ryan Ludlow were also absent from the second night. 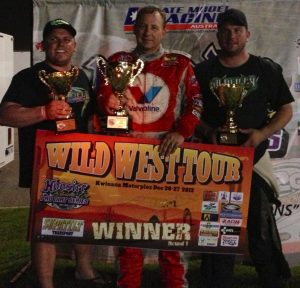 American Steve Francis has continued his brilliant form in the Supatilt Wild West Late Model Tour with another win this time in Round Two held at Manjimup Speedway in the South West of Western Australia. Francis led every lap win comfortably over Warren Oldfield and Matt Goodlad.

The thirty lap A-Main would be a race of attrition right from the first lap with Devin Moran spinning in turn one. South Australian Matt Crimmins would get caught up in the first lap incident and retire to the infield when the car would not refire.

Craig Vosbergen who started near the rear of the field would start charging his way through the field on the highline. Vosbergen would move into fourth before spinning in turns three and four.

Jay Cardy who was running inside the top five for the majority of the race would lose the left rear wheel from his Cardy Racing Components machine. Michael Holmes would also head to the infield with an overheating engine leaving five cars remaining in the event.

Francis would again storm away from the field in the remaining laps winning over Warren Oldfield who ran a lonely race in second place for the entire event. Matt Goodlad would finish third from Ben Nicastri from New South Wales with the two making contact after the chequered flag. Dean King would run out the finishers in what was a torrid thirty lap main event.

Steve Francis continued his dominance in the final round of the Supatilt Wild West Tour, again going unchallenged in the 30-Lap A-Main, but it didn’t come without any controversy.

Francis pulled away from the field in the opening laps. Koran Atkinson would hit the wall hard sustaining big damage to his Cardy chassis. Atkinson would pull to the infield with another restart occurring after Clint Noakes would spin while running inside the top ten.

South Australian Luke Raymond would head to the infield shortly after with front end damage. Francis would continue lead and as the race progressed he would start lapping traffic. A great battle for the minor placings would occur between Devin Moran, Ross Nicastri and Matt Goodlad.

With a handful of laps remaining Steve Francis would spin after contact with a lap car with Dean King spinning into the side of Francis. The Ozmine Rocket of Francis would sustain some damage to the front and right side but be ok to restart at the lead of the race. 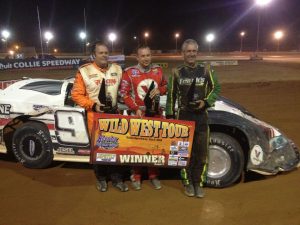 Francis would lead away at the restart with Craig Vosbergen applying a heap of pressure in the final laps of the race. Francis would hold on to win narrowly over Vosbergen and Ross Nicastri.