The 2018/19 season was a huge one for Late Models in Western Australia and the 2019/20 season is looking even better, with the release tonight of the new seasons calendar which is of course headlined by the 2019/20 Australian Late Model Championship.

In what is set to be a huge two night title event, slated for the Perth Motorplex on Wednesday the 8th of January and Saturday the 11th of January, 2020, the two night Championship deal is set to attract a whole heap of top notch drivers as they try and wrestle the crown away from Western Australia.

What makes it even more exciting is that the Title will form part of the now annual USA Invasion Tour, meaning not only will we have some American visitors for the Championship event, but also that the action is set to continue the following weekend with a two night show at Albany Speedway for rounds three and four of the USA Invasion Tour.

As if this wasn’t enough, all four of these shows will also form rounds of the season long Pro Dirt Series!

The calendar will actually begin in October with the annual Ray Tulk Memorial to be held at Ellenbrook Speedway on the 12th of October. This will be the eleventh running of the season opening event and if the quality of racing that has been going on at Ellenbrook throughout the Winter Series is anything to go by, the season will certainly be starting off with a bang!

A fortnight later the Perth Motorplex season will begin in earnest, with the first of twelve nights of action at the venue getting underway with the Powerpalooza event on Saturday the 26th of October.

This will kick off a huge five weekends in a row of action with action back at the Motorplex on the 2nd of November for the Super Speedway Stampede, followed the weekend after with an appearance at Bunbury Speedway for round four of the Pro Dirt Series.

The King of Kwinana event on the 16th of November and the City of Kwinana Cup on the 23rd of November will follow this, making up rounds five and six of the series.

A fortnight off will provide the perfect lead in to the John Day Classic event on the 7th of December followed by a few weeks break again, this time for the festive season before we roar back into life for the Christmas Cup at the Motorplex on Boxing Day to round out 2019 and the last event prior to the Australian Title.

Indeed, the Championship event will be the first of the New Year, with the preliminary night being held on Wednesday the 8th of January before the decider on Saturday the 11th of January.

As previously mentioned, the USA Invasion Tour will then head down the highway to Albany Speedway for a two night show on Saturday the 18th and Sunday the 19th of January.

From here the final four rounds of the season will be held at the Perth Motorplex: the Westernapolis on the 8th of February, the World Series Sprintcars Grand Final on the 22nd of February, the Silver Cup on the 14th of March and then the awesome Gold Cup Grand Final, again including the retro night aspect which will bring the season to a close on the 28th of March.

It is expected to be yet another huge season of racing for Late Models in Western Australia, building on the continued success of last season and as we continue to move forward we would love to see as many people as possible at each and every one of our rounds to see the exciting thunder and lightning division of speedway hit the track once again and have you all on the edge of your seats!

Keep your eyes peeled as in coming weeks the final touches will be added to the calendar including the date of the WA Title, not to mention all those sponsors coming on board for the new season and details of our drivers plans! 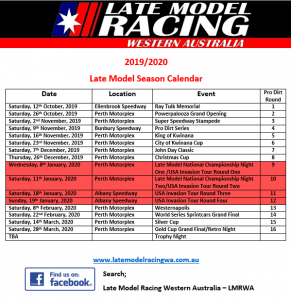